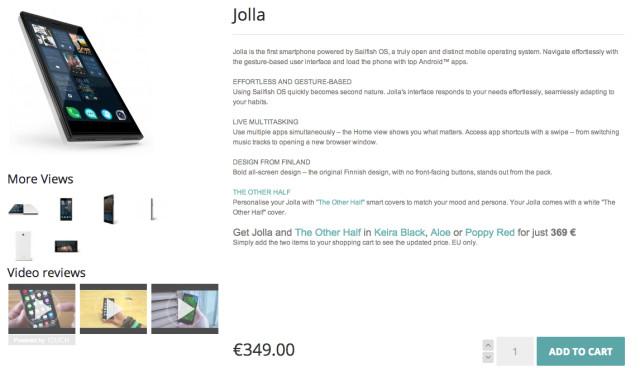 After several months on sale, Jolla has reduced the price of its handset to €349. Originally €399, the Jolla Phone is the first device that was created by a team that left Nokia after Stephen Elop abandoned the MeeGo platform.

Jolla is a group of former Nokia employees that continued work on a Linux-based operating system derived from MeeGo. The result was a new OS, Sailfish, which included a mixture of new features and some elements borrowed from the earlier platform. After creating a new software platform, instead of relying on aging and unsupported hardware like the Nokia N9, the team began working on a new device that would support the OS.

In 2013, the Jolla Phone was launched becoming the company's first hardware device. It had a unique look, employing a design called “ The Other Half”. The underlying concept was that you could someday transform your device into something better by attaching different NFC-enabled backplates to the device. For now, these backplates perform a much simpler task, changing only the appearance of the menus with matching colors and themes.

The newly priced Jolla device is available now via the company's website.