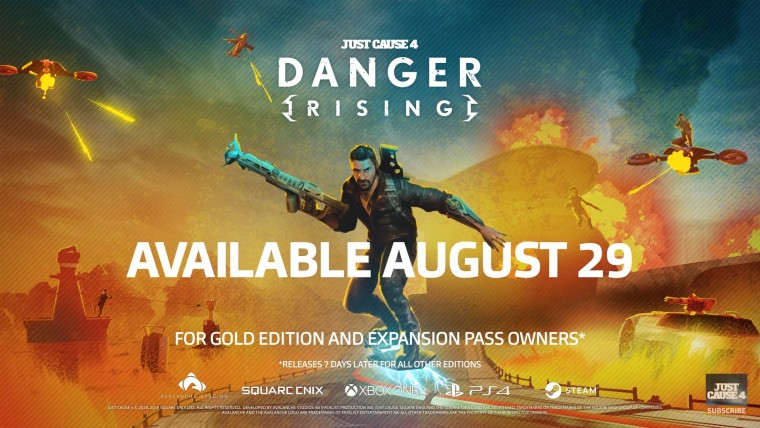 Developed by Avalanche Studios and published by Square Enix, the popular action-adventure title Just Cause 4 was released in December last year. The trailer for Just Cause 4: Danger Rising, an upcoming DLC, just dropped a couple of hours ago revealing launch date and details.

Danger Rising comes out August 29﻿ to Gold Edition and Expansion Pass owners. Unfortunately, those who aren't subscribed to either membership will not have access to the DLC until September 5.

The blurb for Danger Rising reads:

"In Danger Rising, Rico vows to take down the Agency after learning of their plans to eliminate him. Tom Sheldon joins Rico on his mission to stop the Agency with the all new game-changing Hoverboard and gravity-defying The Stormalong EM Zero – a gravity gun that significantly upgrades Rico’s arsenal!"

Just Cause 4 is an action-packed adventure game available to play on multiple platforms including PlayStation 4, Xbox One and PC. Danger Rising is the final installment of the Expansion Pass for the title.