Announced alongside the X1 Carbon and X1 Yoga at CES, Lenovo's ThinkPad X1 Tablet is a wonderful device. It's a tablet with an attachable keyboard, so you'll hear the phrase "Surface Pro competitor" thrown around a lot; however, it improves upon some of the pain points that I've had with Microsoft's suite of tablets.

Unfortunately, it uses an Intel Core i5-7Y57 (in this review unit) processor, so while it sounds powerful because it's branded as an i5, it's actually the rebranded Core m5. This means that while it will be efficient on the battery and doesn't require a fan, it's not as powerful as some of its competition, such as Microsoft's Surface Pro.

As mentioned above, the model that I got to review is the Core i5, and it includes 8GB RAM and 256GB of storage. Unfortunately, I wasn't sent the cellular model, which is a shame, as I do love cellular PCs. To me, there's nothing better than not having to worry about connecting to Wi-Fi when on the road.

I find the ThinkPad X1 Tablet to be an interesting device, because there are so many Windows tablets with detachable keyboards, and many of them are simple Surface clones, but Lenovo has put its own spin on this, and it works.

However, the tablet itself is similar in design to the Surface Pro line, with its flat sides and angled corners. Frankly, it's a design that I've never been fond of, as it doesn't make for comfortable tablet use. 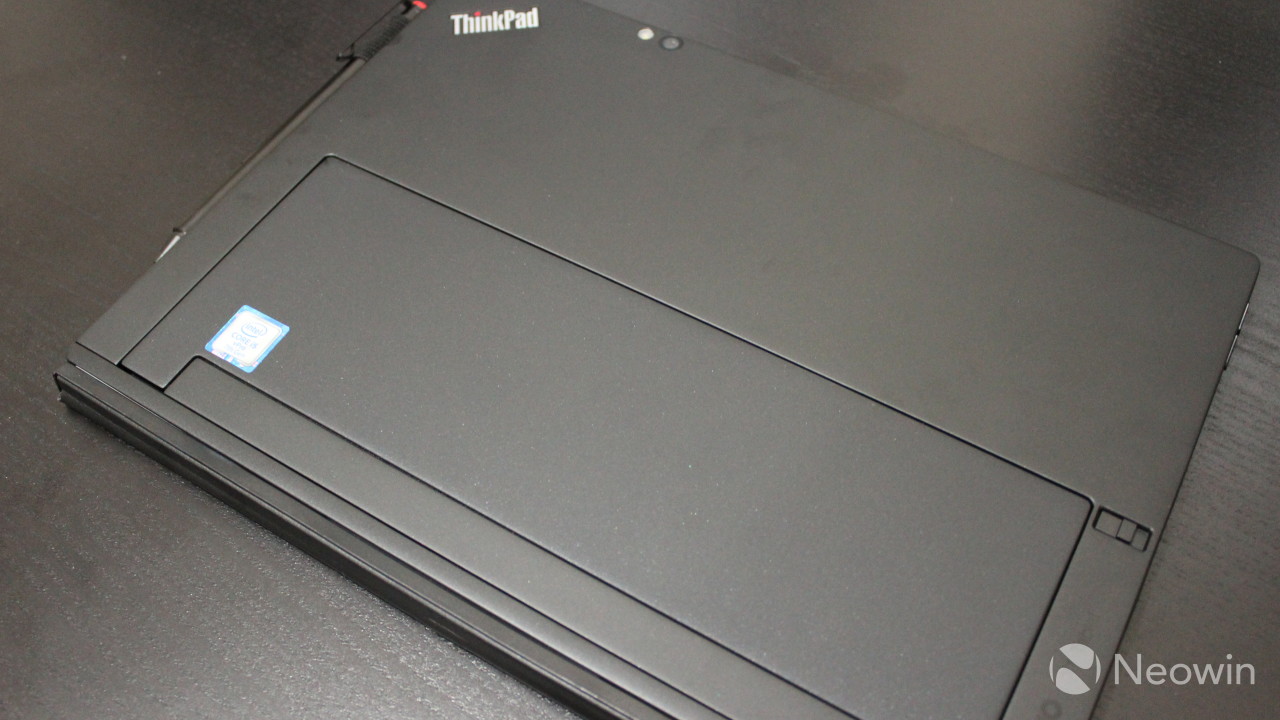 The kickstand is different, as it pops out from the opposite angle as a Surface. This makes the device feel very top-heavy when using it on your lap, although in actual usage, it seems to work better. You'll need to push a switch to open the kickstand, and then you can just pull it open. This design makes it tough for anything where you might want to press down on it, such as if you're drawing Surface Studio-style.

The bezels aren't slim like many of the flagship devices that we're seeing today, and on the top, you'll find the front-facing camera. On the right, there's a fingerprint reader that can be used for Windows Hello. This is presumably placed in that location so if you're using it in portrait mode as a tablet, it's in a natural position.

On the sides of the Tablet, you'll find that on the left, there's a 3.5mm headphone jack, and below that, a volume rocker and a Kensington Lock. On the right are two USB 3.1 ports, one of which is Type-A and the other Type-C, the latter of which is also how the device is charged. Above that, there's a Mini DisplayPort for video output. And finally, both sides have their own speaker.

The display is a 12-inch 1440p LCD, and it looks great. If you read a lot of my reviews, then you know that I feel like 1440p is the sweet spot for PC screens, as 1080p is just too low and 4K sucks up too much of the battery. With the 12-inch 1440p display, I don't see any pixelation, everything seems scaled correctly, the colors are vibrant, and the battery life is still healthy.

I really do love this keyboard. The keys travel 1.35mm, and they're "islanded", meaning that there's space between each key. You've probably seen some detachable keyboards (Surface Pro 3 Type Cover) where the keys are right up against each other, and to me, that's just not comfortable.

They're also pretty quiet to type on. As a loud typer, I appreciate this, as can those around me. 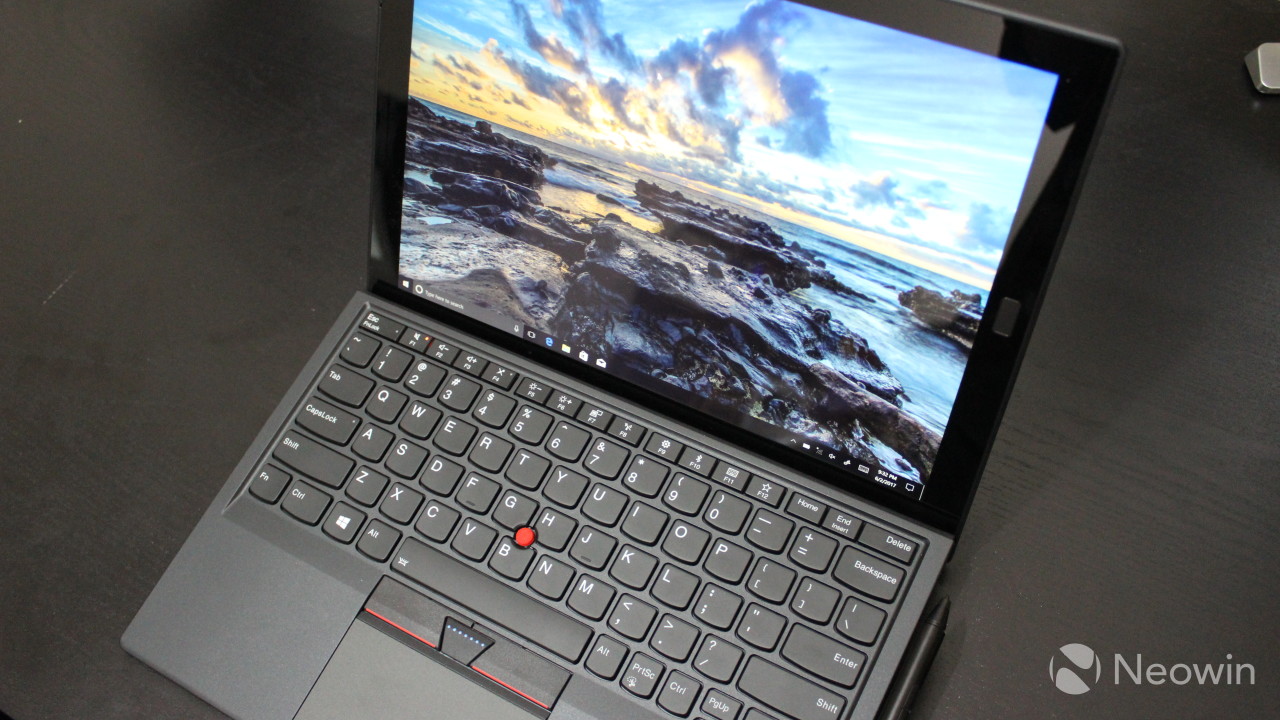 It's also the little things, like the fact that the cover actually stays shut against the Tablet. It has a magnet that keeps it closed until you pull it open, an idea that oddly enough, many OEMs haven't thought of yet. There's also a built-in pen loop, and while I'm not a fan of its placement on the right side of the device (the same side as both USB ports), I'm grateful that it's there. In my experience, holding the pen magnetically doesn't work out. 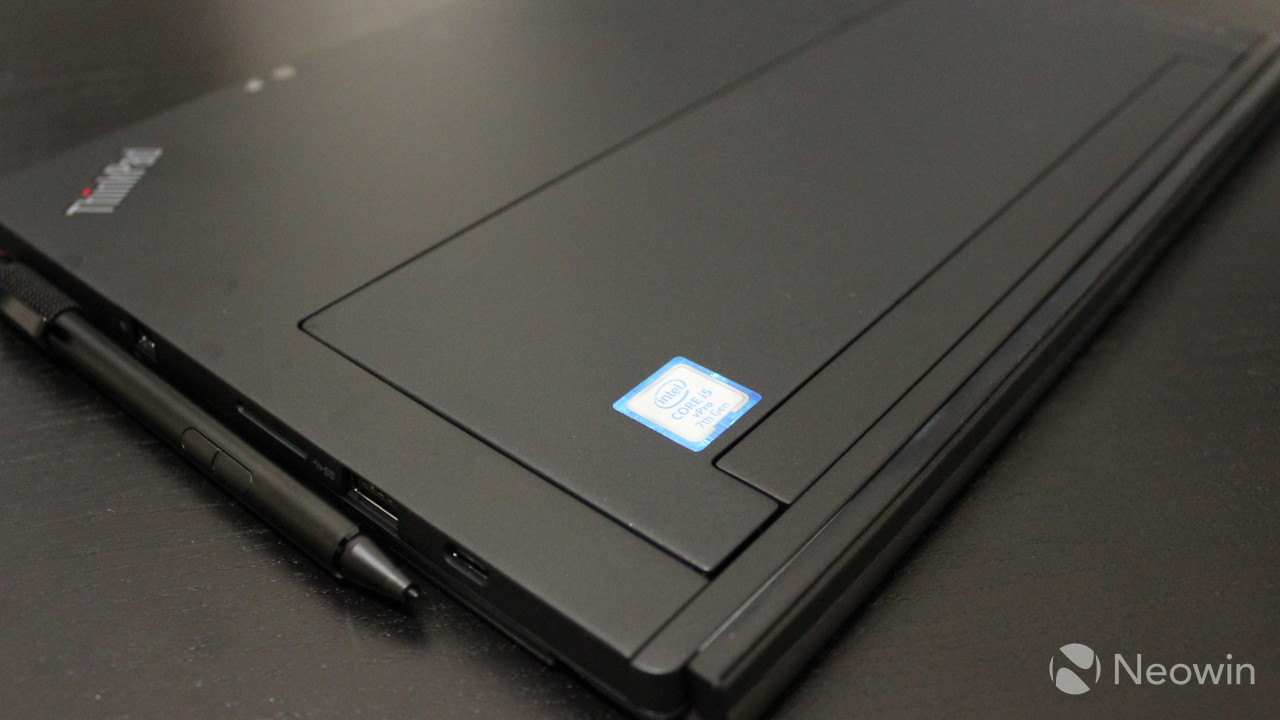 The trackpad is pretty sweet as well. I might take some heat for saying this, but there really was a time when the only PCs that had decent trackpads were made by Apple, and that's not the case today. The one on the X1 Tablet is the right amount of sensitive, it's accurate, and it's comfortable to use. I'm typically a mouse user, so when I find a trackpad that doesn't send me running to the nearest mouse, I'm happy.

Another thing that I want to say about the keyboard is that it feels very sturdy. It doesn't feel as shaky as some other detachable keyboards. My only complaint is that it doesn't use the same connector as the Surface Pro, as I'd love to snap this keyboard onto a device with a U-series processor.

One thing that's great about the ThinkPad X1 Tablet is that it comes with everything that you need in the box. You get the Tablet, the keyboard, and the active pen, so you don't need to worry about separate purchases on top of your already expensive device.

The pen itself supports 2,048 levels of pressure sensitivity, and it only had two buttons on the side; in other words, there's no button on top. It uses a AAAA battery, which is common, but is always a disappointment to me. 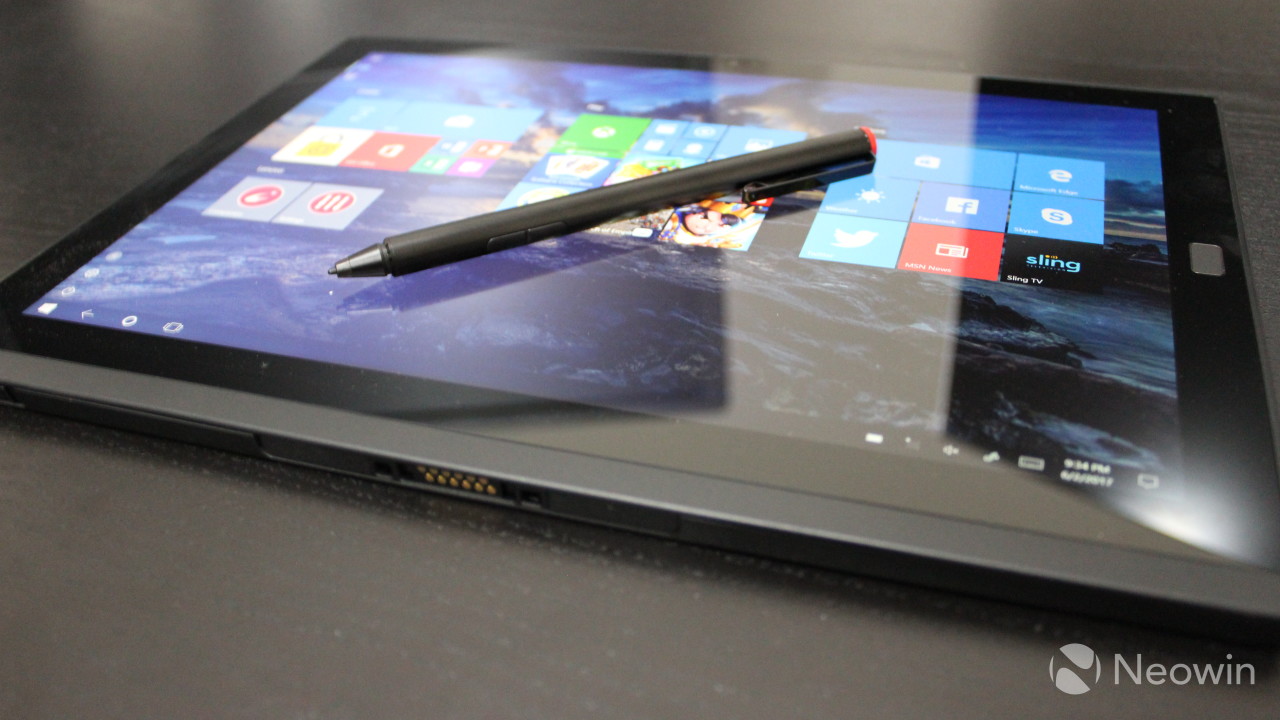 They're rare in Windows tablets these days, but I always preferred the Wacom pens that didn't require batteries. If you're the type that only uses the pen rarely like I am, you've probably picked up the pen after months of no usage and found the battery to be dead, and AAAA aren't as common as you'd think (just go to Amazon).

In regular usage, the pen feels like it lags to me, but that's probably just because after reviewing the iPad Pro that offers 20ms latency, I'm spoiled. In reality, the latency on the ThinkPad Pen Pro is average compared to that with the iPad Pro.

The Lenovo ThinkPad X1 Tablet includes a fingerprint reader for Windows Hello, which looks like it can be used as a Start button, but can't. It just has that sort of design that looks like other devices with physical home buttons.

I'm always a bit disappointed by the choice of fingerprint scanning over facial recognition, as I feel that the latter is more practical in something that will be used as a laptop; however, it does solve a problem. The X1 Tablet is clearly designed to be used in both portrait and landscape orientations, which can be troublesome with facial recognition, because there's no perfect place that the OEM can put the IR camera. 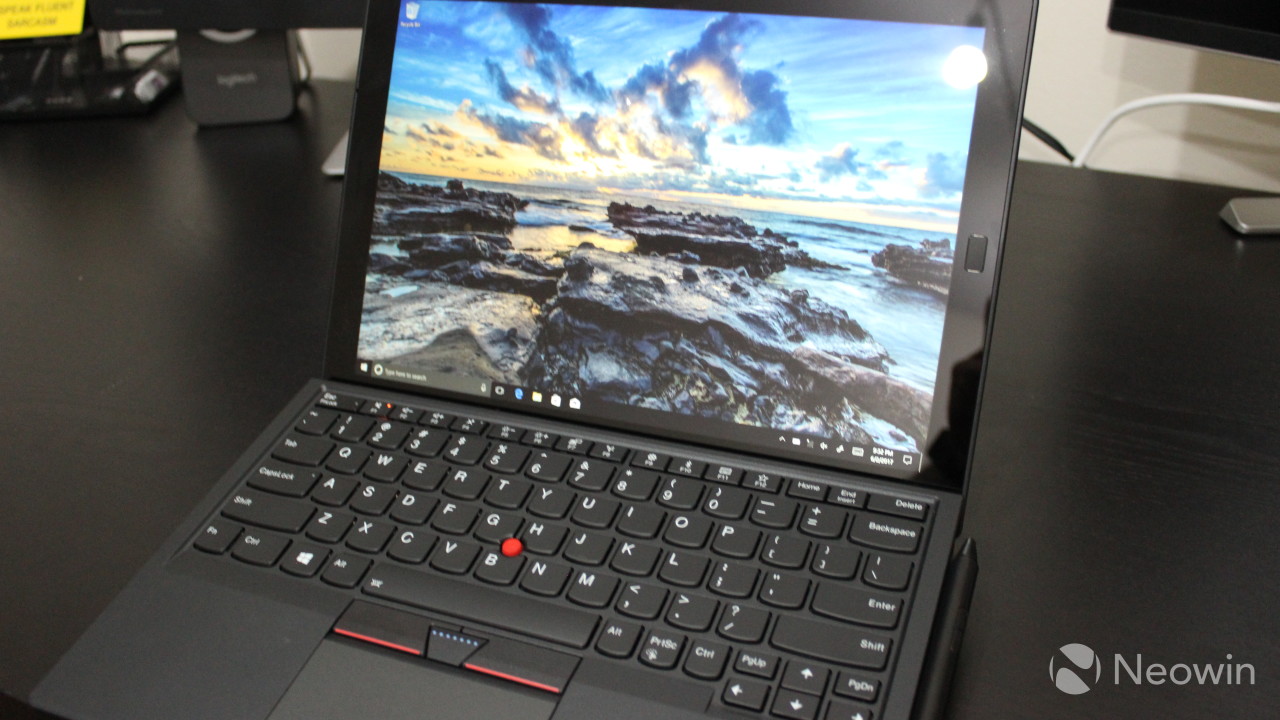 The fingerprint scanner is on the right if it's in landscape mode, or on the bottom in portrait. It's the best possible placement for it, as long as you're right-handed. If you're left-handed, I could see it as being quite awkward.

I've found it to be quite accurate in usage, in that I've never actually had trouble with it. It's not the fastest fingerprint scanner in the world though. It's not slow by any means, but it just feels like I have to hold my finger on it for just a bit longer than should be necessary. If you buy this machine, you probably wouldn't even notice it, but once again, I'm spoiled by the fact that I've used so many devices.

To be completely honest, the speakers on the ThinkPad X1 Tablet aren't great. The good news is that there's one on each side of the device, so you should at least be able to get sound no matter how you're holding it.

The bad news is that they just don't sound good. This isn't really a surprise with a device of this form factor, but in short, the speakers don't get very loud, and they produce a tinny sound. You're going to want to use headphones if you're listening to music on it.

Again, this really isn't the type of device where OEMs are focusing on audio quality, but when you have devices like Huawei's MateBook X laptop that comes with Dolby Atmos, the X1 Tablet pales in comparison.

The ThinkPad X1 Tablet is a Windows Signature PC, which means that Lenovo hasn't flooded it with junk. There are none of those annoying McAfee pop-ups or anything of the like. The only third-party apps are things like Lenovo Companion (for driver updates, hardware scans, and such) and Lenovo Settings, and of course, the UWP apps that Microsoft installs on Windows.

The fact that it's a Signature PC is important, because a Signature images on a PC can do wonders for the battery life and performance. In fact, when people ask me how they can speed up their machine, my first piece of advice is always to reinstall Windows from the Media Creation Tool.

With that being said, the battery life on this machine is pretty great. It certainly doesn't get 15 hours like Lenovo says, at least with real-world usage, but you won't struggle to get through a long workday.

As far as performance goes, that was my biggest let-down with the X1 Tablet. The review unit that I was sent uses a 1.2GHz Intel Core i5-7Y57 processor. If you're unfamiliar, the 'Y' means that it's the rebranded Core m5; in other words, it's not a true Core i5.

The Core M-series, now known as the Y-series, was meant to be power-efficient, allowing for devices with fanless designs. Unfortunately, powerful tasks can be a hassle with these, especially when Huawei and Microsoft are making fanless devices with U-series (the Core i5 that's in most laptops) processors now.

I used PCMark 8 for benchmarks, and the first is the 'Home' test, which is meant show general usage.

As you can see, the results aren't very exciting. Next up is the 'Creative' test.

Once again, the results are not promising. The final test is 'Work', and obviously this tests productivity-related tasks.

As you can see, the Work test shows much better results, and rightfully so. For general usage, a Y-series processor is just fine, and you'll get a super-thin device with great battery life. Just don't plan on serious gaming or editing photos and videos.

Lenovo's ThinkPad X1 Tablet is a wonderful machine, and I really did enjoy using it. In fact, if I had the cellular model, I'd say that the additional connectivity is worth the drop in performance from the Y-series processor. 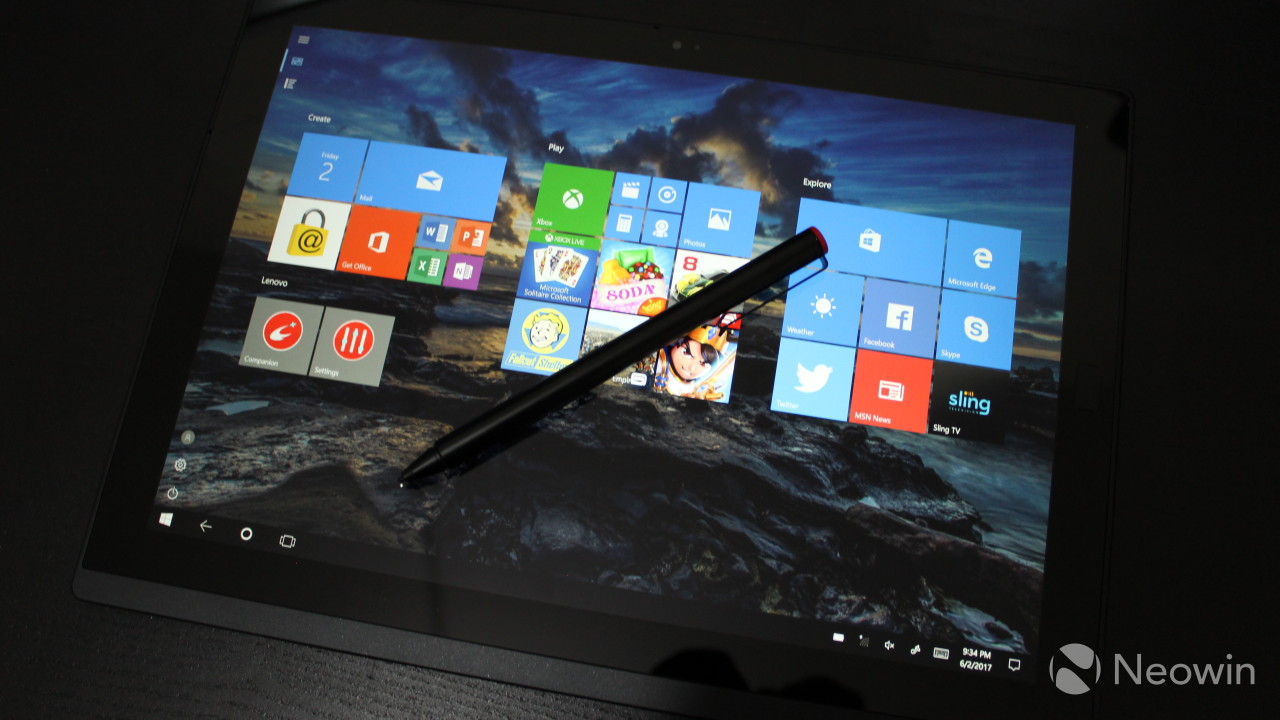 The real problem is that I just can't understand spending $1,449 on it, especially since the base model comes with 128GB of storage and it's $190 extra for 256GB. You can get a lot of computer for that price. Keep in mind, however, that it comes with the keyboard and pen, so if you're comparing it to a Surface Pro, remember that while the Surface has a U-series processor, the keyboard and pen are sold separately.

The keyboard is an absolute pleasure to type on, and the trackpad is great. The display looks beautiful, and you won't complain about battery life. The only thing that you might end up complaining about is the performance.

If this sounds like what you're looking for in a new PC/tablet, it's definitely a buy. After all, I have fallen in love with the X1 Tablet since I've been using it. It's just not for everyone. 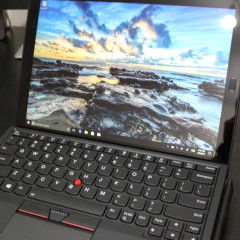 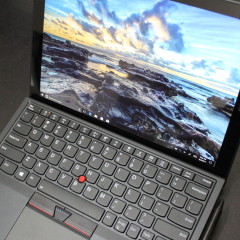 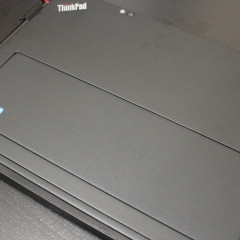 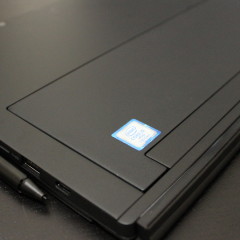 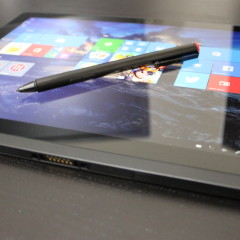 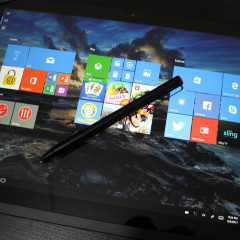 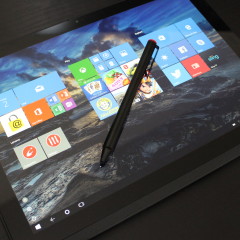