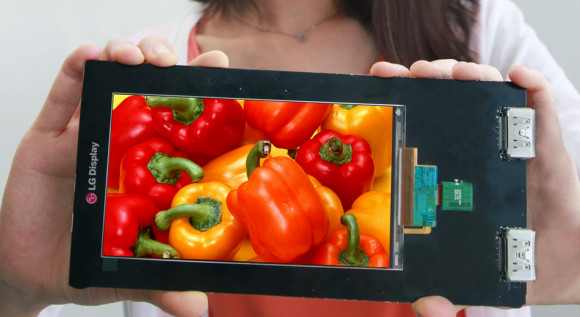 LG is a company known for creating some insane devices and technology in the hopes that some of them will become massive hits. And in this spirit they have now unveiled a new handset screen capable of displaying an insane resolution: 2566x1440.

This new screen outclasses everything currently on the market when it comes to handsets. The screen, coming in at 5.5 inches, will feature "quad HD" resolution, giving the display 538 pixels per inch. For reference, the Retina iPad has a resolution of 2048x1056 on a 9.7-inch screen.

LG explains that this is a breakthrough in screen technology that will benefit consumers by providing crisper images and better color reproduction than any displays currently on the market. And while we can’t argue with how awesome this technology truly is, we can confidently say that the benefit to consumers will be minimal. In fact the opposite might be true.

Thanks to Apple, it’s become common knowledge that the human eye can’t distinguish anything above 350 pixels per inch when viewed at a normal distance, so even though, objectively, the image clarity is increasing, most people actually won't be able to see that unless looking extremely close to the screen. Higher resolution also means increased processing power is needed to move around all those pixels, which means higher energy consumption which means devices will last less and less between charges.

LG is welcome to boast their technical achievement, as we mentioned before it’s nothing short of awesome. But consumers should probably stay away from devices with such displays, at least until our GPUs and batteries catch up with the screen tech.