Ever since Nokia announced the Lumia 930 two months ago at Microsoft's BUILD conference, plenty of people have been eagerly awaiting its arrival. While the Lumia 630 that was unveiled alongside it has since been launched in many parts of the world, the 930 has so far remained the stuff of dreams for those wanting to buy it. 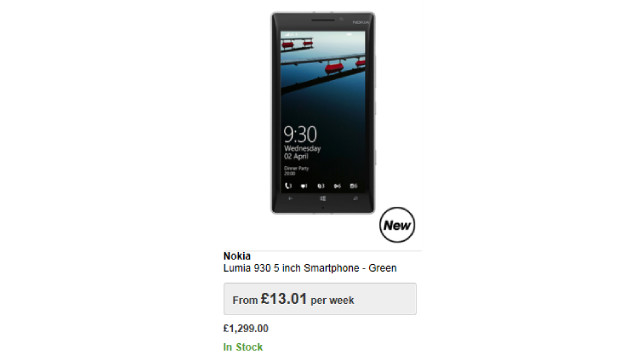 But today, major UK retailer Littlewoods.com - part of Shop Direct, one of Britain's largest online retail groups - has begun selling the device on its site, not for pre-order, but in fact claiming to have the device in stock. Unfortunately, the price set by the retailer for the new Windows Phone 8.1 handset puts it well out of the reach of most buyers. 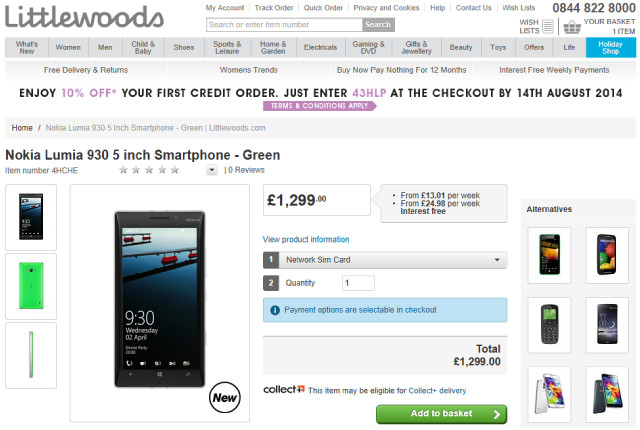 As WMPowerUser notes, Littlewoods.com has set the price at an astonishing £1299 GBP (around $2180 USD) - more than double the amount a device in this class typically costs at launch. There's a chance, of course, that this price is simply a placeholder on the company's site - and the fact that the 4G Lumia 635 has the same ridiculous price certainly seems to support that.

But it is nonetheless odd that not only is the handset "in stock", but it also appears to be possible to actually complete the purchase at that price, with no warnings anywhere during the checkout process indicating that the price is anything other than genuine. The company even promises that the handset will be delivered by Thursday 5 June. 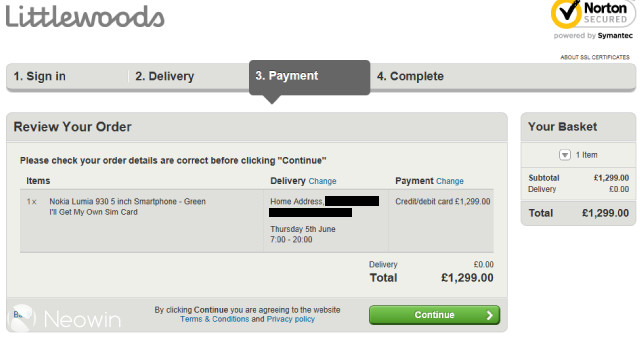 It's also worth noting that Littlewoods.com has a habit of selling devices with sizable mark-ups, ostensibly softening the blow of its pricing by offering credit accounts with 0% interest. 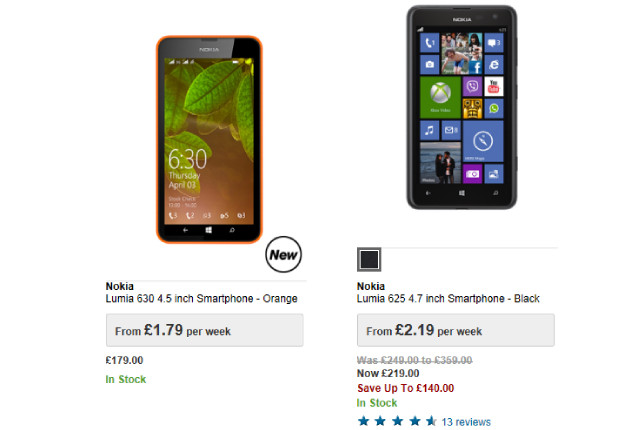 The Lumia 630, for example - which Microsoft announced would be priced at just £89.95 in the UK - is being sold on Littlewoods.com for almost twice that amount, at £179. The Lumia 625 is shown to have once been priced at £359 on the site, despite the UK launch price for the handset being under £250. While other retailers and carriers are now selling the 625 for as little as £99.99, Littlewoods.com is currently charging £219 for it.

It's not just Windows Phones either. The top-of-the-range Apple MacBook Pro - with 15-inch Retina Display, 2.3GHz Intel Core i7 processor and 16GB of RAM is being sold on Littlewoods.com for £2699, a full £500 more than it costs to order the same system directly from Apple.

In this context, it's not at all difficult to believe that the company's £1299 price tag for the Lumia 930 could indeed be the real deal - albeit a truly terrible deal that should be avoided like the plague.

In April, Nokia told us and other distinguished news outlets that the 930 will launch in the UK around the end of June or early July. It will certainly be worth waiting a few extra weeks until more retailers get stock of the device, along with some more realistic pricing.

Update: The Lumia 930 is no longer available to purchase on Littlewoods.com; in fact, the entire listing for the handset has been withdrawn. But if you still want to overpay for other devices, there are plenty of others still to choose from at eye-watering prices.