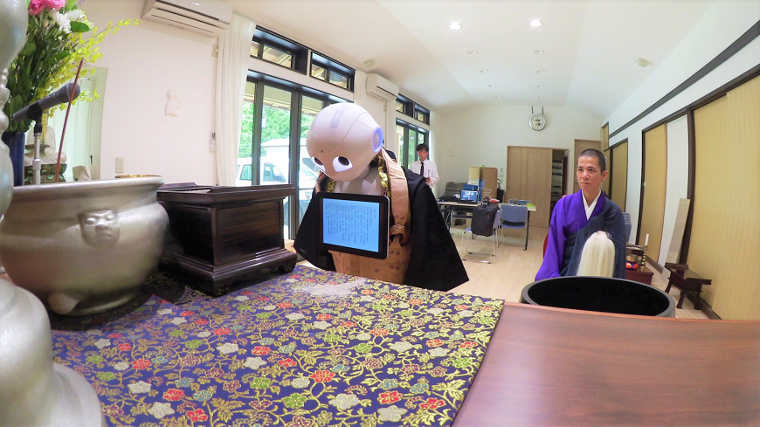 A robot made by Softbank Group has been programmed to be able to perform Buddhist funeral services in Japan.

The robot is called Pepper and it wears a traditional robe during funeral ceremonies, during which it also emits Buddhist sutras, or chants, while hitting a traditional gong. The robot was being showcased at the Life Ending Industry Expo in Tokyo as a cheaper alternative to hire over a human priest. Pepper would only cost $450 to perform a funeral whereas a traditional Buddhist priest costs $2200.

Nissei Eco Co., which gave Pepper its chanting skills, doesn't necessarily want the robot to replace the human priests, but rather Pepper can step in when the priests are unavailable, as modern priests now have other jobs in order to earn an income.

Pepper could then be able to do some of the morning sutras to Buddha, offer a replacement when the human priest isn't available, and also be a cheaper option for families who might not be able to afford the normal service.

Drone deliveries, weaponization of drones for warfare, and even robot police cars are things that have become normal to hear of, but using a robot to do funerals, a very spiritual ritual, seems like something that lots of cultures will struggle with getting used to. A Buddhist monk who had come to observe the robot did not offer a conclusion as to whether he had seen if the robot had shown enough "heart", which he saw as an important part of spirituality, and Pepper has not yet been booked for any funerals.