It's always annoying when your PC crashes, but it's that little bit more frustrating when you have no idea why it's done so.

Even the updated Blue Screen of Death (BSOD) in Windows 10 - with its empathetic sad face - isn't especially helpful for general users, who are simply told to search for error codes such as "BAD_SYSTEM_CONFIG_INFO" or "KERNEL_DATA_INPAGE_ERROR". Users without deep technical knowledge would probably just chuck those terms into a Google search, and end up being overwhelmed by inconsistent and not-always-useful results.

It seems that Microsoft is aware that this is an area in which there's room for some improvement - and as MicrosoftInsider.es reports, the company is experimenting with a change that could simplify the process of diagnosing and fixing issues that cause system crashes.

As the image above shows, the BSOD looks broadly familiar, but the lower half includes a few changes. The new smaller text reads:

For more information about this issue and possible fixes, visit: https://windows.com/stopcode

If you call a support person, give them this info:
Stop code: BAD_POOL_HEADER

But of course, the most noticeable addition there is the QR code, which is ostensibly intended to offer users a fast-track solution to get the support they need on a secondary device like a smartphone or tablet.

A further example, shown in a VM, was posted on Reddit a few days ago by user 'javelinnl': 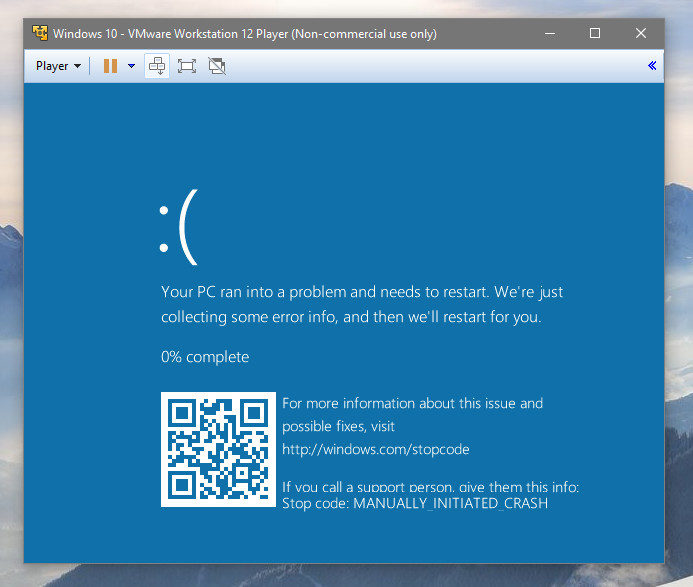 In both of these examples, the QR code simply directs the user to the same windows.com/stopcode URL, which resolves to this page, a generic resource for 'troubleshooting blue screen errors'.

However, it's not hard to imagine Microsoft providing alternative QR codes that can take the user directly to the precise resources needed to troubleshoot the specific issue that caused their PC to crash, helping them to diagnose and resolve the problem far more easily than before.