If you're a serious athlete looking for a wearable fitness tracker, the Microsoft Band isn't going to meet your needs – at least not yet.

Since their rise in popularity began in recent years, wearable fitness devices have set their sights on casual users looking to advance their health. That focus has meant more advanced features – features craved by athletes – have been left unfulfilled. Microsoft was perhaps uniquely positioned to offer such features with the Band’s seemingly more capable hardware and firmware, though in reality it’s simply yet another fitness tracker.

Microsoft makes some lofty promises with the Band, but the overall product doesn't quite live up to the company's vision yet.

Like most wearable fitness devices, Microsoft Band allows users to monitor their steps and calories burned, and it also includes an integrated GPS for running. Including the GPS, there are 10 sensors that provide some advanced capabilities, such as UV and heart rate monitoring, and increasingly common features such as sleep tracking are also available. All that hardware is supported by a companion app that allows users to monitor their results from the three leading smartphone platforms, meaning the Band is among the most ubiquitous fitness trackers available.

While Microsoft has checked off the boxes for hardware and software features with its first wearable fitness device, what it hasn’t done is created a compelling reason for athletes to purchase it instead of a competing product.

In its article announcing the Band, Microsoft promised the device’s sensors would give “actionable insight to help you do great things.” That’s a lofty promise – and, right now, the sensors don’t appear to work together in any meaningful way to provide more accurate information than those found in less-expensive fitness trackers. When not using the Band’s GPS, for instance, the device’s running mode was horrendously unreliable, as it consistently miscalculated my actual mile pace by several minutes, even after calibrating the device by first using its GPS. When I set a treadmill to its max pace of 5 minutes per mile and ran, the Band calculated my pace at slower than 7 minutes per mile. 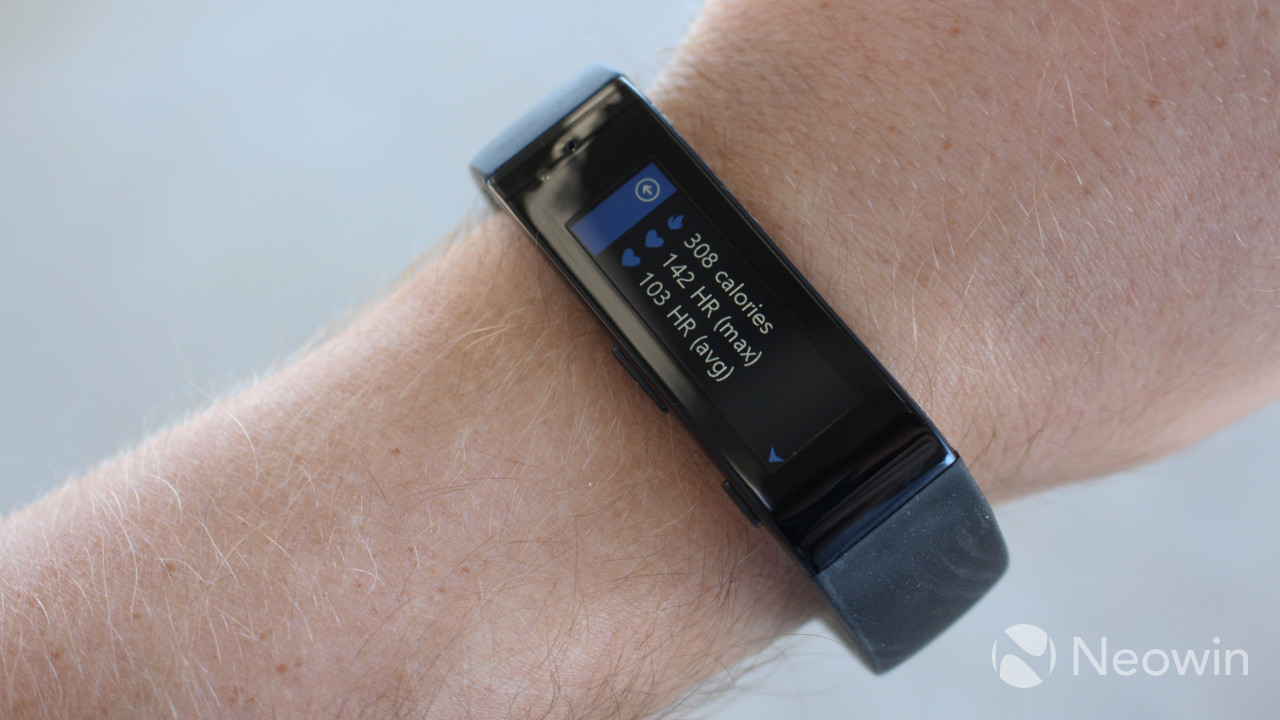 Even the device’s most innovative feature, guided workouts, highlights a glaring flaw: the omission of customizable workouts.

Guided workouts give users specific exercise routines to follow, ranging from a program for beginning runners to total body routines combining weight lifting and other training types. The workouts are all made by Microsoft or third-party content providers such as Gold’s Gym, and the selection is rather limited at the moment. But while the offerings lack quantity, they provide quality on-screen information including the name of the exercise, its duration and then the amount of rest time.

It’s a great feature for beginning users and people actively looking for a new workout, but it leaves athletes who already have a regimen out in the cold. Microsoft hasn’t provided any way for Band owners to create their own workouts, which is more notable when considering some basic features the fitness device leaves out.

Specifically, the lack of an interval option for the watch’s running mode is puzzling. While Microsoft and its content providers can create interval workouts, users lack that capability – a capability most basic running watches have. If you’re interested in interval training of any kind while running, you can forget about using the Band to track your times. There’s no way to start a new interval in running mode, and the device’s stopwatch only goes up to eight splits and won’t store those results in your workout history.

Instead of using Band’s running mode, I’ve become accustomed to setting it to the workout mode and using another watch as a timer when running intervals. It’s a frustrating scenario, as the Band has the necessary hardware, but its firmware is woefully inadequate when it comes to combining all the device’s sensors and capabilities into a cohesive unit. Similarly, even though I appreciate the data provided by the workout mode, I still have to rely on my smartphone to track my exercises when weight lifting despite the guided workouts mode tracking similar routines for training programs made by Microsoft.

If the lack of an interval option and customizable workouts are odd oversights, then some of the Band’s interface design choices are downright absurd.

To actually see your pace and distance while in running mode, you have to pull down on a small virtual tab at the top of the display – a difficult proposition, given the device’s small screen. When you do manage to pull the tab down, the information won’t stay on your screen very long. Pace and distance are two of the most important statistics for runners, yet the Band makes them difficult to monitor. The only way to make them appear on default views is to change the settings in the smartphone app. If you do that, however, the other information becomes difficult to view. 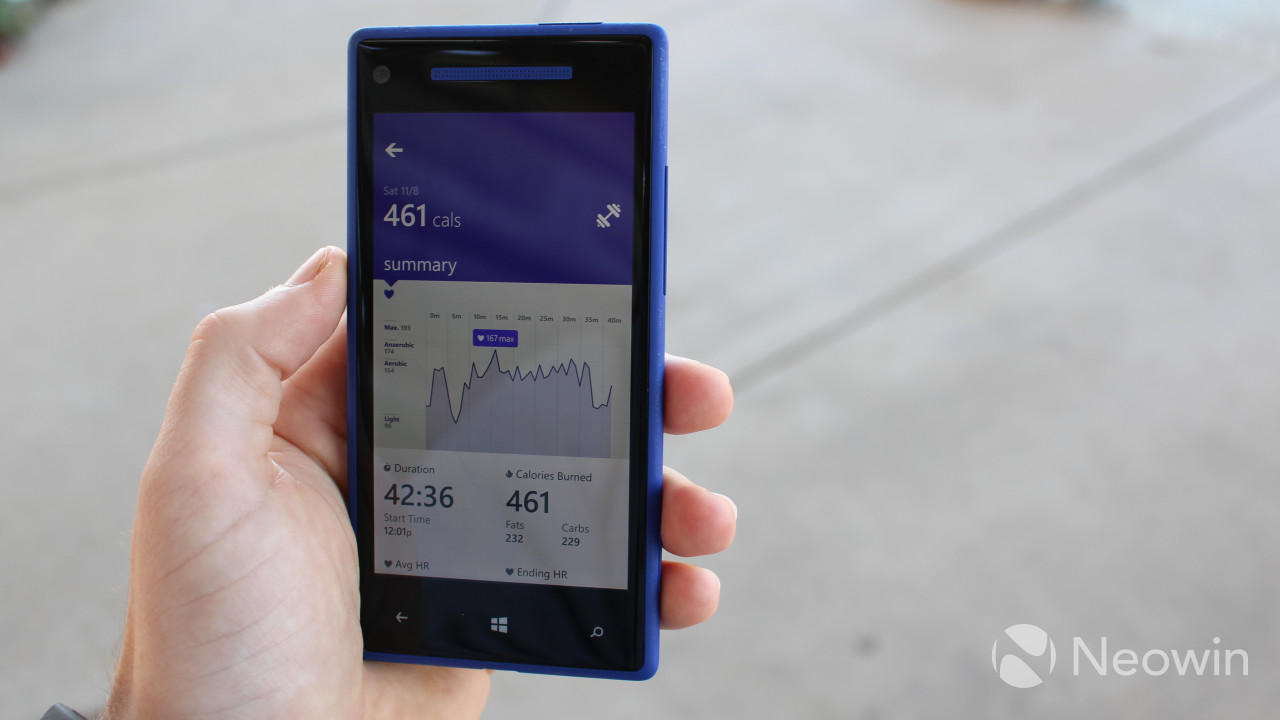 The data provided by the Band is great, but it becomes less valuable when it’s a chore to wade through. I can open the Microsoft Health app and see my heart rate and calories burned after a workout, but what I can actually do with that data is limited. And if you want to know what exercise is resulting in a higher-than-average heart rate, then you’ll have to track your workout in some other way, since the device and app won’t do it for you.

Microsoft claims to have big plans for the data it aggregates through its overall Health platform, which its website says “will continually evolve to offer you better experiences and more valuable data over time.” That remains to be seen, as it’s difficult to say how the platform and Band can improve if they lack customization options. Third-party services tethered to the platform, such as RunKepper, are limited by the same data provided by the Band, eliminating any hope of a linked service providing better tailored results.

Microsoft has a lot of bravado for its health initiatives, but only time will tell the truth.

Despite its obvious early shortcomings, Microsoft’s bravado for its Health platform isn’t lacking. The Windows giant promises that users will “eventually” be able to use its Health platform’s machine learning capabilities to receive “insight into your entire day across nutrition, work, fitness and rest,” but only time will tell if these claims are based in reality. Microsoft hasn’t provided any clear vision for what this data will look like, it’s only said that an online portal will launch sometime in the next six months. There, users will be able to view their archived workouts, presumably alongside the insights Microsoft has promised.

Thankfully, a lot of the Band’s biggest problems aren’t related to its hardware, which is surprisingly great, particularly in a simple area: its closing mechanism. Whereas most watches and wearable fitness devices use prongs that can degrade easily over time, the Band uses a metal track with several notches on the inside that the clasp then latches into. It seems like a minor accomplishment, but many wearable fitness devices rely on plastic parts that quickly break.

That kind of ingenuity is missing from the Band’s firmware and the Health app. For all the bold proclamations Microsoft’s made about how it’s going to change fitness, none of them have made an appearance yet. That could change over time, but half a year is a long time to wait. 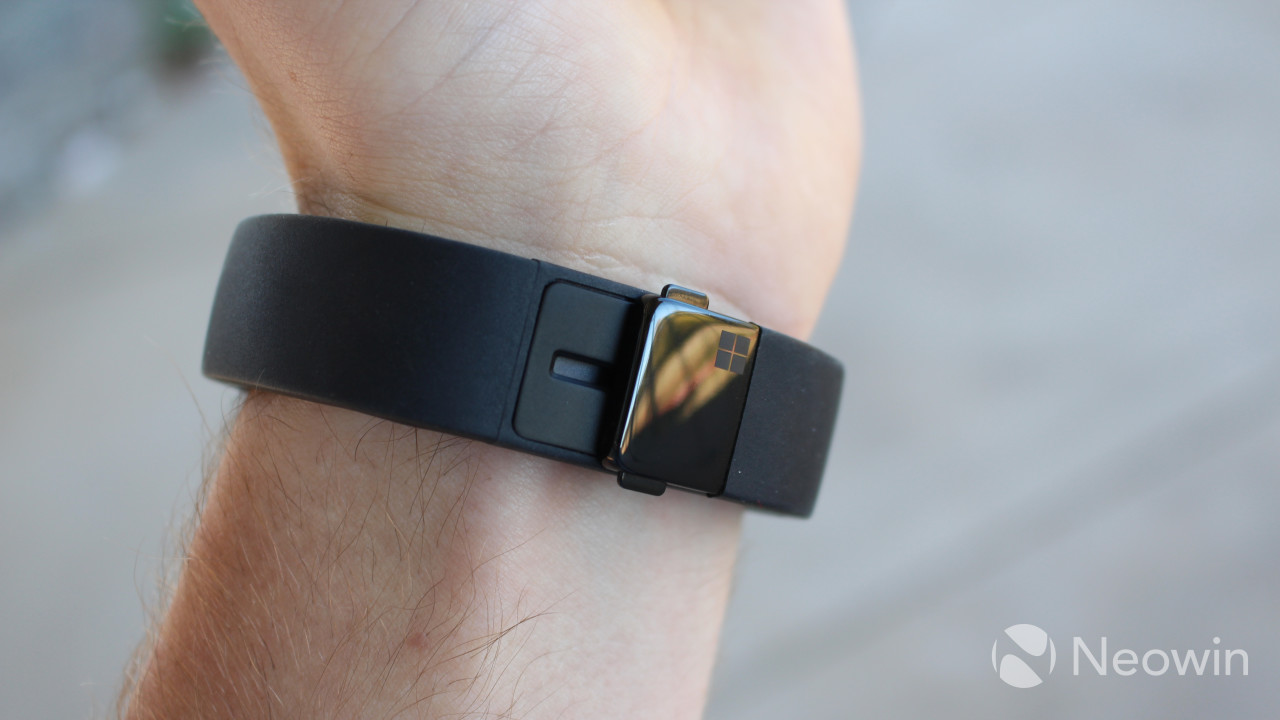 Ultimately, Microsoft Band is a product that has lofty ambitions but lacks any sort of significant differentiating features. The companion Health app gives great data, but there’s simply not enough to do with it at the moment. And that’s perhaps the biggest problem with Microsoft’s new health focus: There’s so much potential that’s gone unrealized.