While Microsoft continues to offer Windows 10 as a free upgrade for Windows 7 and 8.1 until July 29, not everyone is happy about the way the company has been encouraging users to take advantage of that offer - and in China, criticism has been rapidly growing over its increasingly aggressive approach.

After initially allowing users around the world to opt-in to the upgrades at their leisure, Microsoft later began to use more forceful methods to get users to install Windows 10 - for example, by presenting them only with the options to "upgrade now" or "upgrade tonight", and offering no obvious means of opting out entirely.

Many users who later resorted to third-party apps to block Microsoft's persistent 'Get Windows 10' prompts reported that the company was circumventing their efforts, by removing their registry edits in order to re-enable its upgrade notifications. Microsoft later made Windows 10 a 'recommended update', and is now automatically scheduling a date and time for installation, which users must manually opt-out of if they don't wish to upgrade. 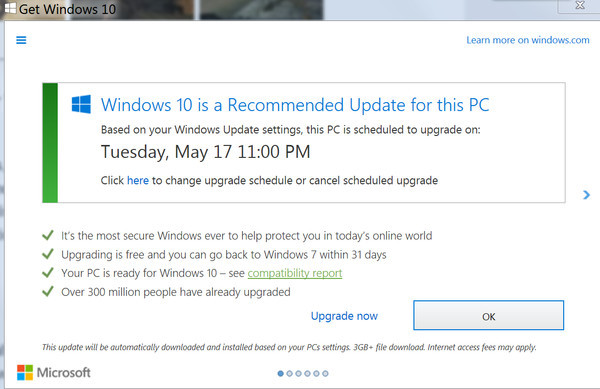 As Reuters reports, Microsoft's pushy approach has triggered a growing wave of frustration and criticism against the company among Chinese users. The Xinhua news agency reported that over 1.2 million complaints had been posted on Weibo by Friday morning.

Even away from Weibo, not everyone is pleased with the way that Microsoft is now pushing its upgrades onto users. Xinhua reported on an incident in which an automatically-scheduled update interrupted the work of Yang Shuo, an employee at a Beijing PR firm. Shuo claimed that the interruption prevented him from completing a business plan on time, which led to the cancellation of a meeting for a deal worth 3,000,000 CNY (around $460,000 USD).

"Just because I didn't see the pop-up," he told the news agency, "does not mean I agreed [to upgrade]."

And it seems there may now be some appetite for legal action in China, in response to what some perceive as Microsoft's excessive push to get users to upgrade. Xinhua spoke with Zhao Zhanling, a legal adviser from the Internet Society of China, who claimed: "The company has abused its dominant market position and broken the market order for fair play."

According to Zhao, users and consumer advocacy groups may be within their rights to file lawsuits against Microsoft, alleging that the company had not respected the rights of users to choose whether or not they wished to upgrade, and that it could profit from the unwanted upgrades resulting from its actions.