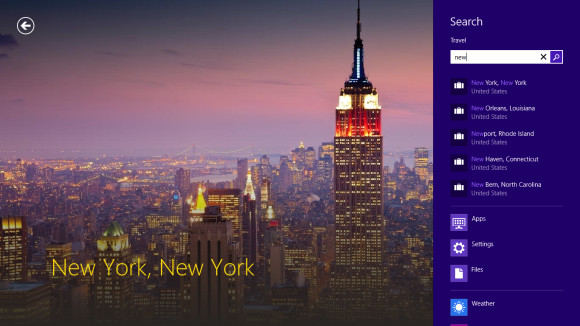 Microsoft's Bing team created a number of apps for the Windows 8 and RT launches, including the News, Weather, Finance, Sports, Travel and Maps apps. Today, Microsoft offered up some more information on how those apps were created.

The official Windows 8 app developer blog reveals that the Bing division created the in-house app team about a year or so ago. All of the apps created by the team were made by using HTML/Java Script, with the exception of the Maps app, which was built by using XAML/C#. The blog states that all of the apps use client side caching, " ... to invest in prefetching and for the client to set the time to live of various pieces of data for a couple reasons."

Part of the reason Microsoft launched so many in-house apps was that it wanted them to serve as a model for third-party Windows 8 app creators in terms of supporting features. For example, all of the Bing-made apps support snap view, a top navigation bar, a bottom command button bar, the share, search and print charm Windows 8 contracts and more.

Windows 8 entered its RTM build well before it was released to the public in late October 2012. Between that time, the Bing apps team took some time to update the apps with a number of performance improvements, including "tuning the startup path in order to optimize CPU usage and I/O calls" and more.

There's quite a bit of technical information on how the apps were made and designed so if you have any interest at all in developing Windows 8 apps this new blog post will be of great interest.