We've heard sad stories for all the other phone platforms before (Well, maybe not for Android), where developers have spent large amounts of time and money on an application, only to have it turned down at the marketplace approval process.

Today, we're hearing that Microsoft has turned down "Imagewind" for Windows Phone 7, even after it was approved. In fact, the application had been published for two weeks, and it was only when the developer sent in a third update for approval, that the software giant asked him to remove it from the marketplace. Imagewind is an application that shows "what is going on around the world via photos posted on Twitter" and does so in a live fashion. The developer calls the app "the perfect time killer."

According to Roger, the developer of the app, he had concern from the beginning it would not make it through the approval process, but submitted a test version in late February to see if it would be approved. To his surprise, it was, on March 3, so he invested not only time and money into the application and website development for the app, he re-submitted an update to the marketplace, which was approved on March 16. Roger says that 10 days ago, when he submitted another update to add further functionality, such as pinch to zoom and search ability, he didn't hear back for a long time.

After waiting patiently, he today received an "app unpublish request" from Microsoft;

Imagewind - app unpublish request
[..] While the images shown are dynamic, per your app’s disclaimer, a portion of the images’ content is too graphic for the app to be permissible in Marketplace. In order to be permissible, there would need to be a content filter before surfacing images since users are not querying a specific type of image and are rather pushed to them.

Given this, we ask that you unpublish your app within one business day until you are able to modify your application to comply with the certification guidelines.[..]

Thank you for your understanding in the matter, and we will hope to see an updated version soon.

Microsofts email means that because the app contains "unfiltered images from Twitter" he essentially must constantly manually filter images from Twitter, which is not realistic. Roger points out that the iPhone has the functionality to show a warning for similar applications, if it will bring in questionable content, it warns the user. Windows Phone 7 doesn't have this yet (and may never have it). The actual problem with the app is the user has to explicity request to see the questionable content, but this is not possible. 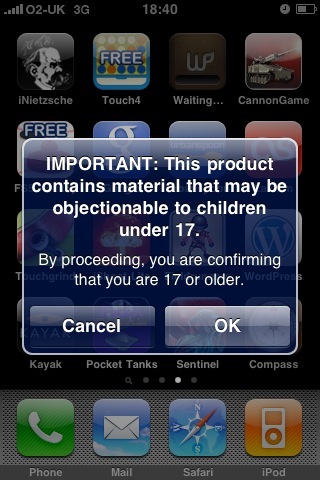 Roger had even created his own dialogue, pictured below to work around the problem, but this apparently was not enough.

This kind of move from Microsoft is probably not great publicity for the company, and could push other developers away from the platform, considering that if you built a web browser, or normal Twitter client you may have to adhere to the same guidelines. Neowin has contacted Microsoft for comment, but are yet to hear back.

The XAP for the software is still available, over on SmartyPantsCoding, the developers website.

Update: We've heard from Microsoft New Zealand. Nigel Parker, a Microsoft employee's response right now was: 'Microsoft is currently working on a solution to the issue.' Strangely enough, Neowin contacted the developer directly, who hasn't heard from Microsoft more than once. Why is Microsoft ignoring the quality developers that make the platform shine? We're going to continue to chase this.