Last month, Microsoft announced that it would roll out Dolby Vision video streaming support to Xbox One S and Xbox One X. Today, Dolby Vision HDR is officially available to Xbox Insiders on the Alpha Skip Ahead and Alpha rings. 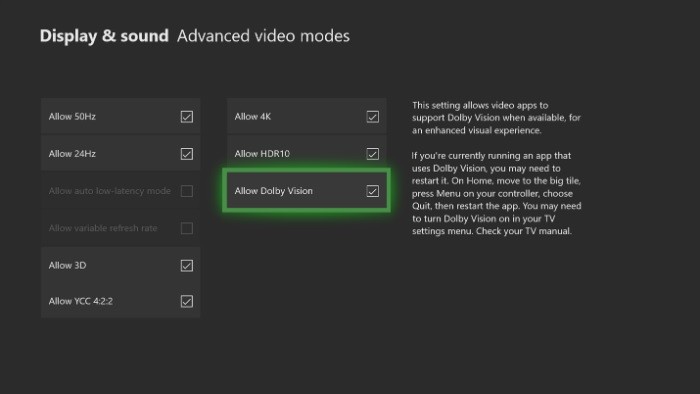 With the latest release, Xbox Insiders with a compatible TV that supports the latest version of Dolby Vision will be able to stream Netflix content on Xbox One S and Xbox One X. Bradley Rossetti, Xbox Insider Team Lead, said in a blog post that more than 400 hours of content on Netflix are now available in Dolby Vision such as Altered Carbon, Stranger Things, Marvel’s The Punisher, and Lost In Space, among others.

To get started with the new feature, make sure first that your TV supports Dolby Vision by heading over to the 4K TV Details page under the Settings menu on your Xbox One S/X. Compatible TV sets include those manufactured by Sony, LG, and Funai. You can also check if your TV is compatible by clicking here. Then go to Settings -> Display and sound -> Video output -> Video modes and then toggle on "Allow Dolby Vision". Keep in mind that you need a premium Netflix subscription to stream Dolby Vision content.

Have you tried out Dolby Vision on your Xbox One S or Xbox One X? Let us know what you think in the comments!