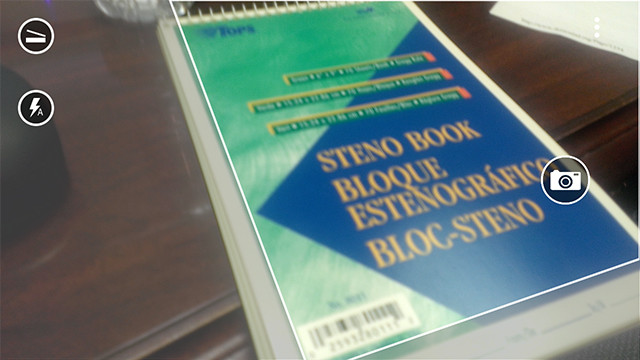 Optical character recognition technology has long helped consumers and businesses convert photographs of text to document format, and now Microsoft is bringing that technology to a friendly format for Windows Phone users, releasing the Office Lens app for the smartphone operating system.

The camera app, available for download via the Windows Phone Store, transcribes text from photos of objects such as whiteboards, printed documents and business cards, saving them to OneNote for access later. Three modes are available for different scenarios – photo, whiteboard and document. In whiteboard mode, for instance, the app will make photos more readable, trimming and fixing glare and shadows; the document mode makes similar adjustments. Photos are stored both locally and in OneNote, which also stores the text data.

Office Lens provides visual cues in each mode to indicate what will be trimmed from photos for the best possible reproduction. In document mode, backgrounds will be highlighted with a translucent white, indicating what will be trimmed out, while the document itself will appear in full color.

To use the app's text recognition features, a Microsoft Account is required, as OneNote is the only way to access the information. The account used for the app must be the same one associated with the Windows Phone device running it. The release coincides with Microsoft releasing a new OneNote app for Macs and making both it and its Windows desktop counterpart free.