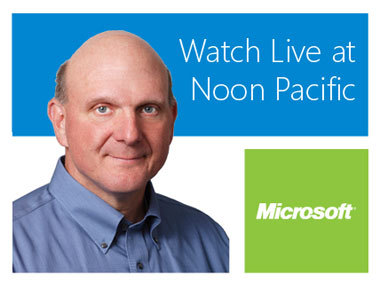 Microsoft has issued a press alert that Steve Ballmer will be making an announcement later today. The event will happen at noon today PDT and we are expecting that they may be announcing Office 2013, if previous rumors are true.

You can find the information below about the call but the details are incredibly vague, even by Microsoft's standards:

Just a few days ago, USA Today stated that on July 16th, Microsoft would release the Office 2013 beta, possibly called Consumer Preview. While we do not know for sure what Microsoft will be announcing, all of the information about the Office release appears to be lining up. Is this the reason for the call or does Microsoft have something else up its sleeve?

Microsoft also recently split up from NBC and is moving away from MSNBC.com, this could be another possible reason for the call but to get the CEO involved for a small announcement such as that, seems a bit trivial to us. While the call could have something to do with Windows 8, we highly doubt this considering they announced last week the RTM would occur the first week of August and retail availability will be in October, not sure what else they could say on that front.

Whatever Microsoft is planning to announce, we will know in about five hours from now. Stick around, the fun is only getting started.