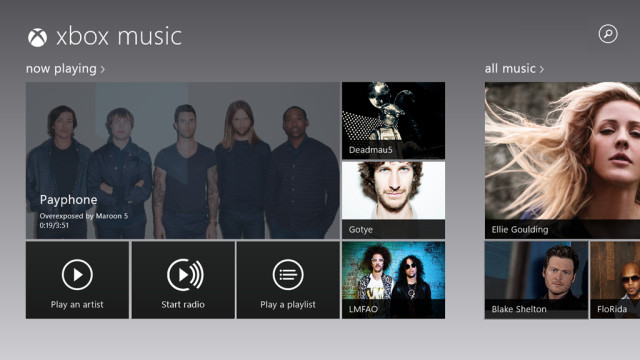 Microsoft is apparently not waiting for next week's BUILD 2013 conference to release some new versions of its in-house Windows 8 apps. Today, the company revealed that the Xbox Music app received a fairly significant update with two new useful features.

The Windows Experience blog reveals that the new version of the Xbox Video app should be available for download in the Windows Store right now. As you can see in the screenshot above, one of the features shows a search button on the top right side of the app. When used, the button lets Xbox Music owners search in the app itself for their own songs stored on their PC, or on the online Xbox Music catalog.

Windows 8 owners can also test out the streaming service on Xbox Music in a new way by listening to up to 15 songs before signing in. If they like what they hear, Windows 8 users can sign up to access free unlimited streaming for six months. After that, their streaming time is limited to 10 free hours a month unless they pay for a Xbox Music pass. Microsoft also stated the Xbox Music app update has some unnamed bug fixes and UI improvements.