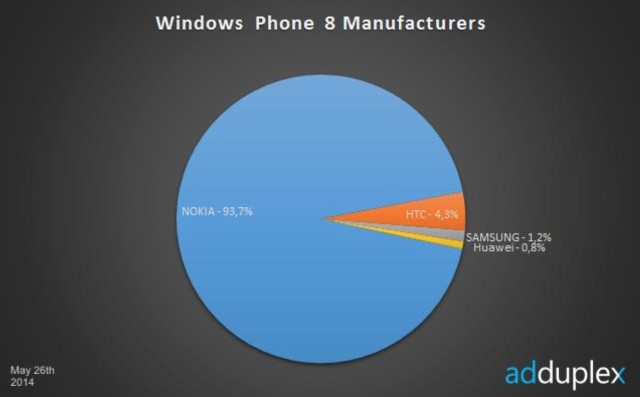 We all know that Nokia's handset division, which was sold to Microsoft, accounted for a large portion of the Windows Phone pie and that trend continues for the month of May. In fact, according to Adduplex, Nokia phones gained another .2% of the pie, while not a huge increase in the overall picture, it shows that they are still growing their presence.

It was quite obvious why Microsoft had to buy Nokia's handset division as they were more in control of the destiny of Windows Phone thanks to their massive presence in this space. But for Microsoft, they need significantly more OEM support if they wish to gain more adoption in the over-all user market space as Windows Phone is still a minority player when compared to iOS and Android.

As you can see from the data, HTC is the only OEM who even makes a small dent in Microsoft's share with Samsung, who is a power-house in the Android department, barely surpassing 1% of the user base. While the Lumia handsets are fine pieces of craftsmanship, until other OEMs take Windows Phone and start putting it on their premium hardware, the platform will always be the 'second OS' for these vendors which will continue to limit the growth potential for the platform.

For OEMs, Microsoft is making Windows Phone more attractive by making the OS free for devices under 9 inches in size. Only time will tell if this is enough of an incentive to build more devices using the OS.

With Microsoft pushing Windows 8 forward with the 8.1 update that will be arriving soon, the company is not waiting for OEMs to pick up the slack and is willing to go forward, on its own terms, and show the market that it too, can compete in the highly competitive smartphone arena with first party hardware.