A MIT spinout company, FINsix, has developed a power adapter designed for laptops that is around 25% smaller than the current units used. The technology has been shrunk by using a novel method of utilizing very-high frequency power-conversion that means the adapter can transfer power through to the battery over 1,000 times faster.

Phys.org also reported how the unit is more efficient too, as power is delivered more often and in smaller chunks. The increased frequency means that less energy has to be stored temporarily in inductors and capacitors within the adaptor meaning reduced size. The main bulk of current power units comes from the large numbers of capacitors within, according to co-founder Anthony Sagneri. He explained

"If you can increase that switching frequency, you can reduce the amount of energy that you have to store temporarily in the inductors and capacitors - which make up the bulk size and weight of power bricks - during the conversion process, and that yields reduced size."

Called the Dart, not only is the device much smaller than existing adapters at around 2.5 cubic inches but it is also just one-sixth the weight at 2 ounces. You certainly won't be able to apply the popular 'power brick' term to this as it is only slightly larger in terms of overall size than a standard plug. It could well become the next best thing to the wireless charging found on some smartphone models, such as the majority of Nokia's Lumia range. 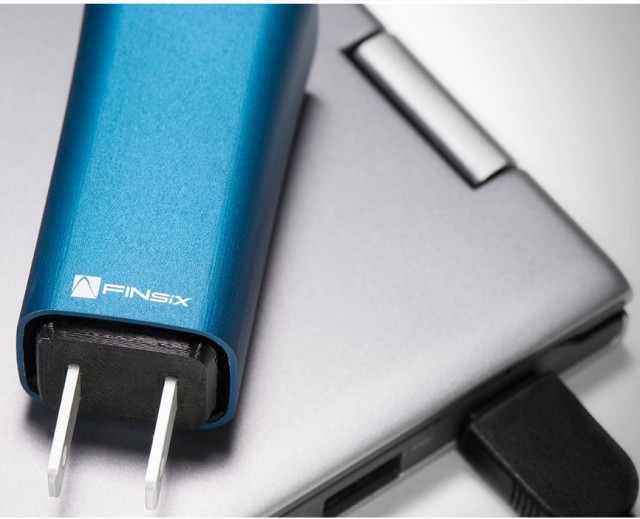 Rated at 65-watts, the Dart is suitable for charging the vast majority of laptops, smartphones and tablets. FINsix is aiming to ship the first 4,500 units to the Kickstarter backers who made the project possible by November.

The company was founded by four MIT alumni - Vanessa Green, Anthony Sagneri, George Hwang and Justin Burkhart - and originally set out to shrink the power converters used with LED lights. After completing the AC-DC technology used with those, the company turned their attentions to laptop adapters and built the Dart shown today.

If the device is accepted by the manufacturers of the various items of gadgetry we use daily, then it could finally spell the end of lugging around a heavy, oddly-shaped power adapter with us all day. The device also allows for a bit more flair as it is available in many bright colors unlike the ubiquitous black found on today's 'bricks'. The company says it is ready for use with any laptop brand although pre-orders are currently closed until after the first batch is shipped.