Before operating systems are built, they, like most products, are given rough mockup designs to determine what they should look like and how they should operate. Windows 8 is no exception to that rule, and one Microsoft design manager recently revealed some of the early mockups to its latest operating system.

Jensen Harris, director of program management for the Windows user experience team, took to the stage at UX Week 2012 earlier this year and showed just how far the operating system's interface has come. The event took place in August, although the mockups are just now coming to light thanks to Long Zheng, creator of MetroTwit, noticing them.

During his hour-long presentation, which can be seen above, Harris showed early mockups displaying some familiar – yet at the same time, very different in some ways – appearances than what ended up in Windows 8.

"That has always been Windows' great strength, that it's familiar," Harris said at the conference. "Yet we were seeing things change all around us, and so we wanted to sort of question to the team, 'Is familiarity always the winner? Is that always the thing that's going to keep yourself relevant for years and years and years?'"

Most of the ideas Microsoft considered when redesigning the traditional Windows interface were related to how technology has advanced. In his presentation, Harris pointed out that many of the Windows interface elements have remained relatively unchanged in the past 20 years.

The mockups, which can be seen beginning at about the 59-minute mark of the video, show how Microsoft considered revamping those elements. The majority of the mockups remain consistent with the final version of Windows 8, although it's clear many of the bold colors and shapes of Metro weren't added until later in the design process.

"Originally we had ideas for a whole bunch of charms, but we ended up deciding on five," Harris said. "But the idea that they came in from the side [stayed the same]. Having this vision fixed in people's minds [what the operating system should look like]."

That original charms bar, seen below, included many of the same options as the final version, although some features were removed, such as a favorites charm. 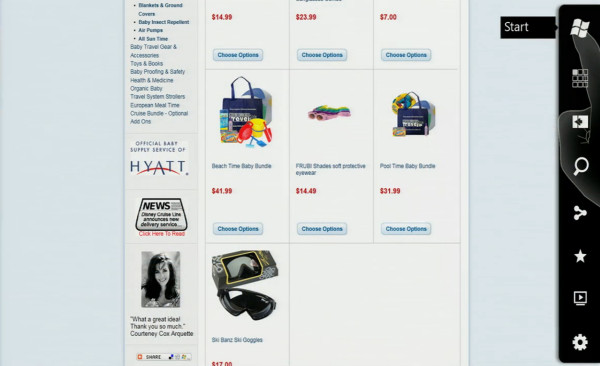