For many, Apple’s announcement earlier today about its next major update for Mac OS X, known as ‘Mountain Lion’, was a bit of a surprise. It wasn’t just that there had been effectively no hint that such an announcement would be made now; it also raised eyebrows because the current version of the OS X operating system – 10.7 ‘Lion’ – was released just eight months ago.

Apple had previously settled into a two-year update cycle for OS X, with 10.5 ‘Leopard’ arriving in October 2007, and 10.6 ‘Snow Leopard’ arriving in October 2009, so it’s certainly surprising to see the next major update arrive so soon. This seems to be the shape of things to come, however, as Apple confirmed to Pocket-lint that it has realigned its development schedule to now bring OS X updates every year. While the OS update is immediately available to download for Mac Developer Program subscribers, it’s expected to be publicly launched this summer, just over a year after Lion, and probably a few weeks after Apple’s Worldwide Developer Conference. 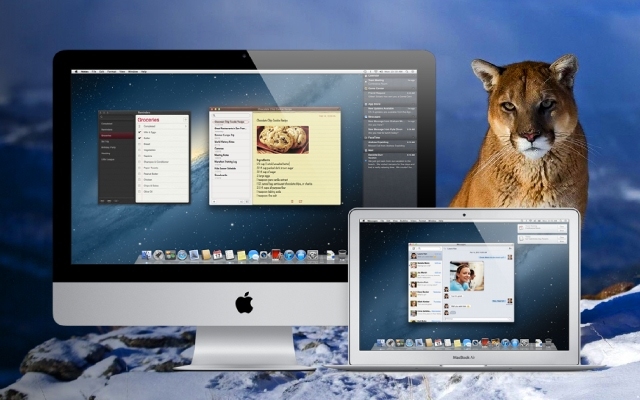 There’s no word yet on what the update will cost (OS X Lion is currently sold for just $29.99 in the US and £20.99 in the UK), but we do know that it will be available exclusively from the Mac App Store.

When Lion was released in July last year, many consumers raised concerns about the practicality of downloading such a large amount of data (almost 3.5GB), given the speed and consumption limitations imposed upon some users’ web connections.

Apple acknowledged this issue by allowing users to download the update in its stores, while for those unable to make it to an Apple Store, the company made the update available on USB thumb drives, although the cost of purchasing these drives was punitive, to say the least – in some markets, the update on the physical drive cost up to two and a half times more than the App Store download.

This time around, there’ll be no USB key option – but speaking with Pocket-lint, Apple claimed that it’s because there was so little interest in that option anyway: “It was an interesting test, but it turns out that the App Store was just fine for getting the new OS.”

It was also confirmed today that Apple has dropped the 'Mac' part of the operating system's nomenclature; henceforth, it shall be known only as "OS X".