Despite having so far had a modest impact on the market, there remains a great deal of buzz and interest in the Windows Phone platform, even if that hasn’t yet translated into significant handset sales. Microsoft’s ‘special relationship’ with Nokia is of course a principal component in its ability to offer Windows Phones in multiple languages, regions, form factors and price points.

Yesterday, we reported that Nokia is preparing to bring a new entry-level handset to its range of smartphones, dubbed the Lumia 610. Although unnamed sources were behind that information, the Lumia 610 got a whole lot more real today, as LiveSide.net uncovered confirmation that the device has been officially certified by Indonesia’s Ministry of Communication and Informatics.

GSM 900/1800 bands will be supported, as well as the WCDMA 2100 band; wi-fi and Bluetooth are also supported. There’s little more to report from the certification documentation, other than the news that the 610 will be built in South Korea. As far as we’re aware, the plan remains for the Lumia 610 to be announced – alongside an international version of the Lumia 900 that goes on sale on AT&T next month – at Mobile World Congress, a couple of weeks from now.

It’s currently anyone’s guess as to what the Lumia 610 will look like, but nok4us.com claimed that an unnamed tipster claiming to be a Nokia employee had sent them this image, purporting to be that of the new Windows Phone: 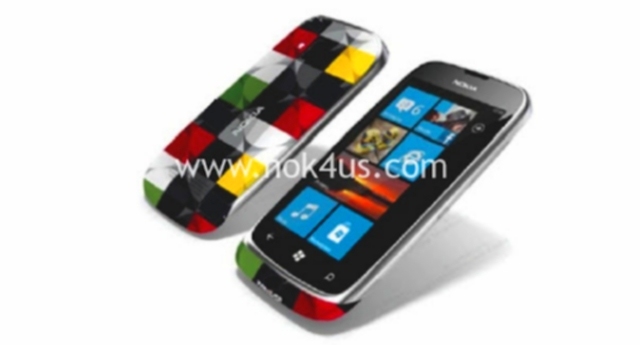 The device reportedly has removable covers (hence the rather unorthodox rear-side graphics of the handset in the image). There are no details yet on pricing for the 610, or on which markets it will launch in, although Indonesia is one obvious candidate. The 610 is expected to include a relatively modest spec sheet – as little as 256MB of RAM, a 3MP camera and a 3.5” display – to take advantage of new capabilities in the ‘Tango’ version of the Windows Phone OS, which is optimised for performance on low-end devices for developing markets.

Curiously, nok4us.com claims that the 610 will be the second Nokia handset to run Tango. As ZDNet's well-connected Microsoft-follower Mary Jo Foley has previously suggested, based on information from her sources, there may be two seperate Tango versions - the first, a new version of the Windows Phone OS customised and optimised for developing markets and low-end devices; the second, a minor update delivering new features and fixes to existing Windows Phone 7.5 (Mango) installations.

If this is the case, then that the 610 may well be Nokia's second Tango handset (using the Tango version optimised for entry-level handsets), while the new international flagship handset that we're expecting at MWC will be the first Tango device (using a version of the OS that is essentially Windows Phone 7.5 Mango, plus a few new updates and features, such as improved SIM contact management and MMS support).

Confused? Don't worry, we all are - and we all will be until Microsoft shares more information about Tango at MWC. With just a couple more weeks still to go, thankfully there's not much longer left to wait.