Google will soon be releasing Android O, the next major version of its ubiquitous operating system. As in previous years, the company will also be launching new 'showcase' devices for its OS, and for Android O, those devices will be the successors to its Pixel and Pixel XL, which launched with Android 7.1 Nougat last year.

Just under a month ago, a render published by Android Police purported to show the new Pixel XL, codenamed 'Taimen'. The image showed a device with significantly smaller bezels above and below the display, along with some minor design revisions to the rear of the handset.

But according to Evan Blass (better known as @evleaks), posting on VentureBeat, the smaller Pixel will look a lot more like its predecessor than some had been hoping. The image shown below, which is said to be a photo of the smaller 2017 Pixel, codenamed 'Walleye', suggests that its top and bottom bezels will be far larger than those of many other new flagship-class handsets, such as LG's G6 and Q6, and Samsung's Galaxy S8 and S8+.

In the adjusted image below, you can more clearly see the edges of the display, showing just how large those top and bottom bezels are on the smaller Pixel. 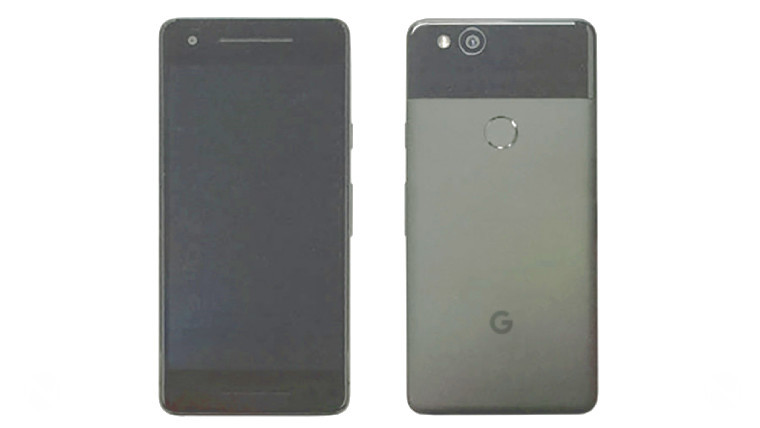 Google tasked HTC with manufacturing both the Pixel and Pixel XL last year; but this year, it seems that the Taiwanese firm will only be building the smaller of the two devices, with LG building the new Pixel XL. This would seem to explain the design difference between the two handsets, as LG has experience in building devices with smaller top and bottom bezels, whereas the 'forehead and chin' of HTC's devices remain considerably larger.

However, both handsets are expected to eschew the dual rear camera setup that has become increasingly common on other top-of-the-line devices, including Samsung's upcoming Galaxy Note8, and Apple's iPhone 7 Plus.

Unfortunately, the new Pixels are also expected to share something else in common with the latest iPhones: neither of the two Pixel phones is said to have a 3.5mm headphone jack. This also lines up with information reported by 9to5Google's Stephen Hall yesterday.

However, Evan also reports that HTC will be providing audio expertise for both its own Pixel and LG's Pixel XL, which will each include front-facing stereo speakers. Another HTC feature is also said to be coming to both devices: the 'squeezy' pressure-sensitive edges of HTC's new U11 flagship.