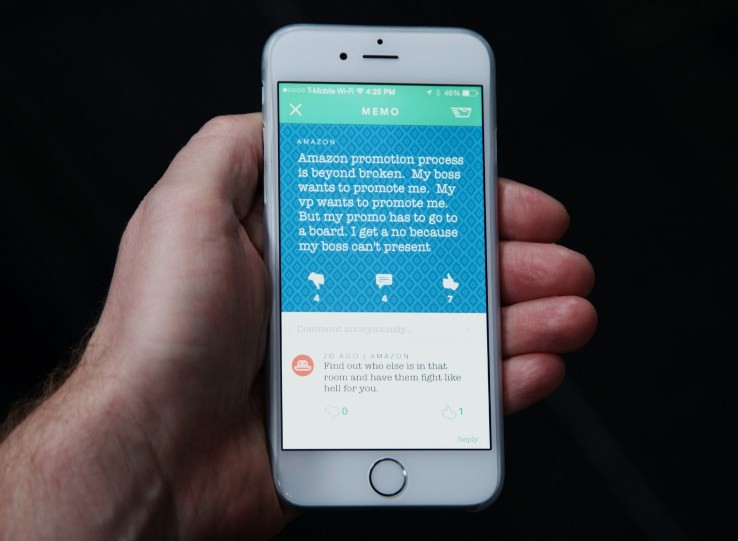 Have you ever wished to rant about that annoying co-worker in your office without getting identified? Or are you just looking for an outlet to spill your mind's thoughts while doing your day job?

Enter Memo, a new messaging app that prioritizes its users' anonymity. It is quite similar to the mobile app Secret, where people can express their thoughts freely without revealing the personal identity.

The app is geared towards people in the workplace. Users have to verify their affiliation with a company first, either via LinkedIn or a company email, before being able to use the service and post in a company group. They are then assigned a random username containing a number and the company name.

Companies are assigned "memo boards" on the app. Users can post something like, "That new guy sure looks gorgeous," or anything they want to say or express, within the company's network. Posts can also be shared publicly, but they are only identified by the company the users are working for.

However, the app's founder, Ryan Janssen of the company Collectively says that there have been pushbacks from companies over the app. He has reportedly received two cease-and-desist letters, and two companies have already blocked emails coming from the app.

Janssen explains that the app should be a method for office workers to express their thoughts. He states:

“We walk into the office with a largely constructed facade. That’s exhausting and we’re giving people a place to just be their real selves.”

The app's privacy policy states that it cannot do anything if ever a user gets identified. Also, it states that the app should be used to make the users' company better, and to celebrate, more than complaining, which is always expected in the workplace. Janssen emphasizes:

“What we’ve found is that people actually want to like their company,” Janssen says. “They just don’t like feeling powerless.”

The app is currently only available for Apple devices. You can get it on the App Store here.