Although the Xbox 360 console itself is now over seven years old, people seem to know a good deal when they see one. During the Black Friday seven-day sales period two weeks ago, Microsoft managed to sell 750,000 Xbox 360 consoles, more than any other console--even much newer ones. Many of those sales were part of specially-priced bundle packages, where users could get some free games and other content. 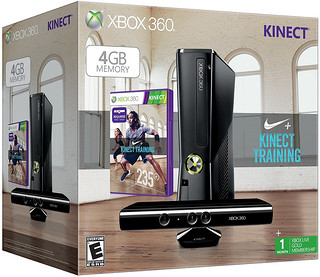 Today, Microsoft, via the Major Nelson website, announced yet another special Xbox 360 bundle, but this one is being aimed at a different audience. It's the Xbox 360 Nike+ Kinect Training bundle and it includes the 4GB version of the console, the Kinect motion gesture add-on, one month of Xbox Live Gold service and a copy of the Nike+ Kinect Training "game" for $249.99.

Yes, Microsoft is selling a bundle designed not for people who want to sit on the couch, but for folks who want to get off that couch and work out in front of the TV screen. Launched earlier this year, Nike+ Kinect Training offers users a number of different exercises that use the Kinect sensor device to track a person's movements. You can also compare your results with other Nike-endorsed athletes and celebrities.

Microsoft also announced that Nike+ Kinect Training will be available to download via Xbox Live for all Xbox 360 owners on December 25th. The next day, it will release an add-on for the game called Fast and Focused: Upper Body and Core Pack, for $4.99 or 400 Microsoft points.