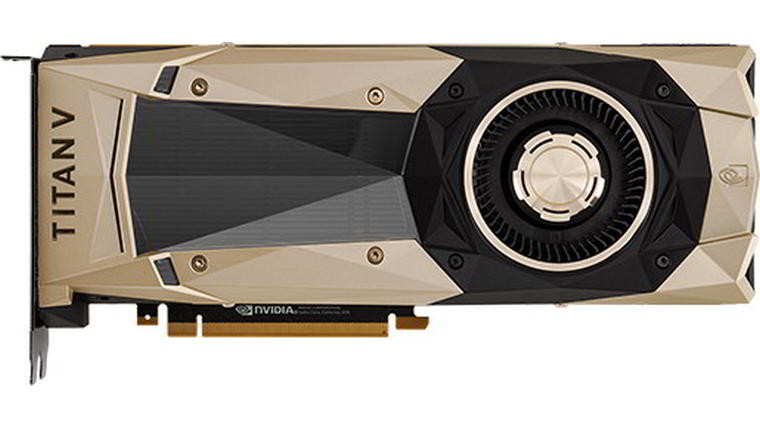 In a surprise announcement, Nvidia has unveiled a new Titan V GPU, utilizing the powerful Volta architecture that it debuted back in May with the $10,000 Tesla V100. The good news is that this new card is a streamlined version designed for the PC, coming in at only $3,000.

The reveal, made by Nvidia CEO Jen-Hsun Huang at the Conference on Neural Information Processing Systems (NIPS) in Long Beach, CA, should be welcomed by those looking for top-of-the-line power in their PCs, without having to pay the premium price of the specialized, yet cumbersome, V100.

Huang said the new Titan V sports nine times more power than its predecessor, with 110 TFLOPS, offers 12GB of HBM2 memory, and has more than 21 billion transistors. It is designed to be a slimmed down version of the V100, in much the way the 1080 TI was a scaled down model of the Titan Xp. The V100 offered 16GB of HBM2 memory, a 1.75Gbps transfer rate, and a 4,096-bit interface, while the Titan V brings the previously mentioned 12GB, 1.7Gbps memory data rate, and three 3,072-bit memory paths.

Here are the official specs from the Nvidia press release:

“Our vision for Volta was to push the outer limits of high performance computing and AI," Huang said in a statement. "We broke new ground with its new processor architecture, instructions, numerical formats, memory architecture and processor links. With Titan V, we are putting Volta into the hands of researchers and scientists all over the world. I can’t wait to see their breakthrough discoveries.”

While the card is not aimed at gamers or developers, if you have an extra $3,000 lying around, you can order the card now from Nvidia. The company is limiting two per customer.