Late in September, Microsoft shared that there were 669,000 apps in the Windows Store, and just a couple of weeks ago, the company also revealed that there have been 2.5 billion visits to the Windows Store since the launch of its latest operating system. Indeed, going by these stats, the company has improved considerably the situation of its app store, but is still struggling to close the 'app gap' completely. Now, Comedy Central, a popular American entertainment channel has announced that its official app is "leaving Windows". 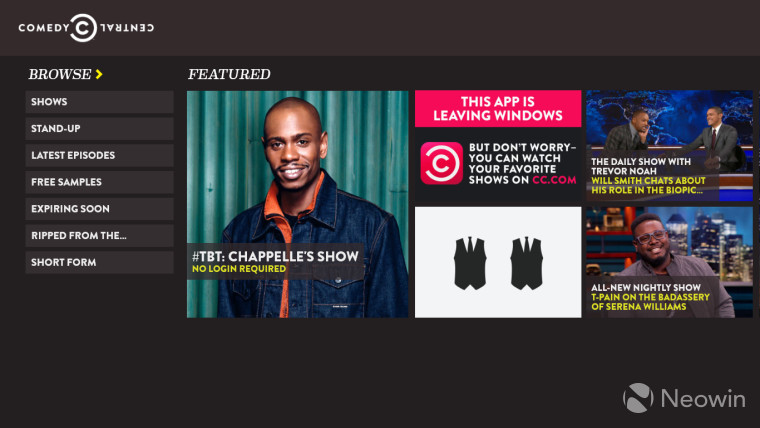 When users open the app on their Windows PC, tablet or phone, they are greeted with the following message:

This app is leaving Windows.

But don't worry — you can watch your favorite shows on cc.com.

While the application is still available for download, Windows users are required to make the transition to the Comedy Central website - or find a third-party alternative. The official app was built as a Universal Windows Application, but had mediocre ratings of 3.3/5 and 2.9/5 in both the Windows and Windows Phone Stores respectively. It allowed access to popular shows on the Comedy Central channel including South Park, The Colbert Report, and Inside Amy Schumer.

With that being said, the news of popular apps still leaving the Windows Store despite the launch of Windows 10 doesn't bode well for its users. While the arrival of several other big-name apps and games including Stealth Inc. 2, Minecraft: Story Mode, World of Tanks Blitz, Netflix, Adidas miCoach and more provides hope to the OS' users, the departure of several other popular apps including Mint, Path, and now Comedy Central indicates that there's still room for improvement in Microsoft's strategy.