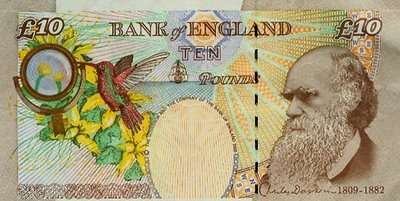 The note above is £10 from the Bank of England. Upon it is an image of Charles Darwin, famous for his work and research, creating and validating evolution as a theory. Darwin has been on the note for a considerable period of time, alongside an estimation of some of the flora and fauna he may have seen during his travels aboard the HMS Beagle. Darwin's historic contribution has undoubtedly been massive, but his time as the face of the £10 note may be running short.

A petition on the official government website has seen some traction, including being posted to Reddit's r/Technology subreddit. Alan Turing is famous for his work on the modern computer, though also was remarkable for other reasons. For example, Turing displayed some symptoms of Asperger's Syndrome, and also worked at Bletchley Park during WWII. Bletchley Park is famed as the location where the supposedly unbreakable 'Enigma' machine pioneered in the Third Reich was cracked, and information from Germany's High Command became readable.

In some ways, using Turing as the face of the £10 would be socially progressive: he was homosexual, and was prosecuted as a criminal in 1952 for this, suffering chemical castration as a result. Turing died in 1954 from cyanide poisoning, ruled as suicide. The topic has been one of intense debate since this, with his mother believing it was accidental death. Furthermore, theories exist that Apple's logo was inspired by Turing's supposed method of suicide: he bit into an apple laced with cyanide. This was denied by Apple themselves, and it is even questioned whether this proved to be Turing's cause of death. The apple was never tested for cyanide.

The post has made it to the front page of the Technology subreddit, and at the time of writing, the actual petition has over 3,800 signatures. Of course, it is entirely possible the petition will be overlooked, as has happened before. Despite this, it has inspired a group of Redditors to contribute their thoughts and views towards Turing appearing on the note. As is typical of Reddit and its public commenting though, it is possible comments will become NSFW over time, so readers may want to avoid viewing it at work.