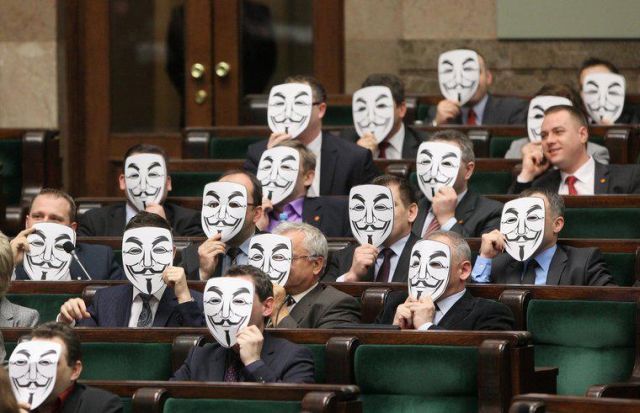 While the fight against the SOPA and PIPA bills in the US Congress has taken a bit of a breather, new protests have sprug up over the international Anti-Counterfeiting Trade Agreement (ACTA). Like SOPA and PIPA, ACTA was written in part to try to combat online piracy but opponents have claimed the act is too broadly written and will result in blocked web sites.

The agreement has already been signed by a number of countries, including the US. However, there's been a growing movement by a number of people to try to stop more countries from getting on board ACTA. It's been the most active in Poland where street protests against ACTA in that country have happened earlier this week.

TechDirt reports that despite the protests, Poland's government signed onto ACTA on Thursday. In perhaps the strangest protest of all, a number of Poland's lawmakers decided to don Guy Fawkes masks in Parliament to protest the vote. These masks have become well known as one of the symbols of the hacker group Anonymous. The group has been busy launching cyber attacks on a number of web sites in the past week, in part to protest laws and agreements such as ACTA.

ACTA opponents are not likely done yet with their protests as the agreement still has to be ratified by the EU's Parliament.