I have to admit that as a fan of Star Wars I didn't hold up much hope for this Kinect mash-up of campaign missions and mini-games. For me Kinect has been little more than a great example of what the future may hold for gaming, as there has been little in the way of any stand out titles that want to make me put down a controller and stand in front of my TV waving my arms and legs about.

The thing is that Star Wars is the perfect vehicle for Kinect; with a multitude of force powers used in the films and the motion control aspect of the hardware within the Kinect and Xbox 360 you can at least expect some feel of power from thrusting your hand out and “Force pushing” enemies out of the way, though how it will feel wielding a lightsaber around without having something in your hand still intrigues me.

The main bread and butter of Kinect Star Wars is the Jedi Destiny mode, which sees you take on the role of a young padawan learner. The game brings you up to speed with many of the force powers and lightsaber moves that will become the mainstay of things single/co-op section of the game.

Lightsaber moves are pretty easy to learn right away: Simply swing your right (or left) arm around and your on-screen padawan will mimic your move. Fighting involves blocking enemies' attacks by swinging your lightsaber in the right direction at the right time and then going at them with a multitude of attacking moves.

Your other spare hand is used for force moves such as push, throw and pick up. These can be used to push enemies to the floor, over edges or to crush with various pieces of scenery strewn around the levels. 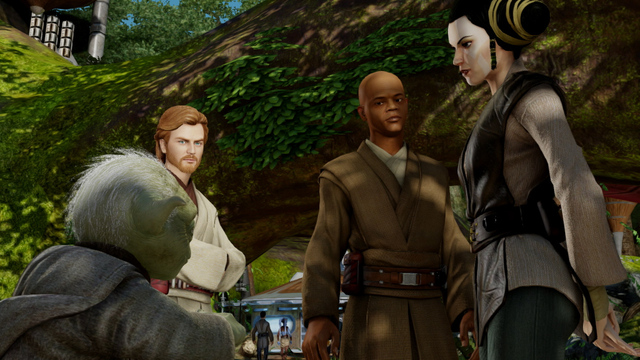 Moving your padawan is done by putting one foot forward, they then move ahead to the next area and so on. Jumping over obstacle is obviously done by jumping, crouching by crouching and so forth. At times you will be required to do a fast force run move with you do by thrusting out your arms.

Levels are broken up by taking part in space battles, speeder biking (which I enjoyed) and landspeeders sections. The controls for these are explained at the beginning of each area and once again are pretty easy to get used to.

Controlling the lightsaber is a little weird, it works well enough movement-wise, but something feels wrong not having a device in your hand so that you feel that you are actually swinging something around. Force moves are cool though, despite being very basic and linear.

The gameplay itself is pretty easy to complete, heck I managed to get through nearly the whole section in one sitting and that was on the advanced mode.

Now let's talk about the Dance Central based mini-game that is called “Galactic Dance Off.” in this area of the game you get to strut your dance moves across four varying Star Wars locations. They are Jabba's Palace on Tattooine, Bespin's Cloud City, Coruscant, and the Death Star. 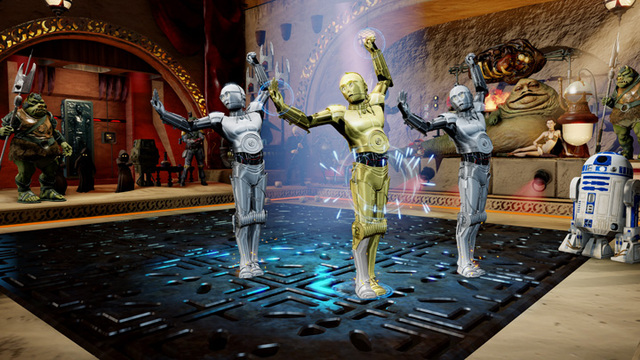 To say that this area of the game won't appeal to many adult Star Wars fans is an understatement, especially when you see such well loved characters as Han Solo and Princess Leia dancing about in moves that are not explained or shown to you before the game begins.

Again while this may well not appeal to many adult fans of Star Wars, those brought up on Jar Jar Binks may see some kind of fun in this. I personally didn't, despite my nieces playing this section a few times. I'm not sure what made them add this section though as the children would much rather put on Dance Central and play that than they would this.

Podracing is probably the best part of the whole package, with decent motion controls and a reasonable feeling of speed. It is also a game that you are likely to come back to more and more as it isn't as easy to complete as the the rest of the games. 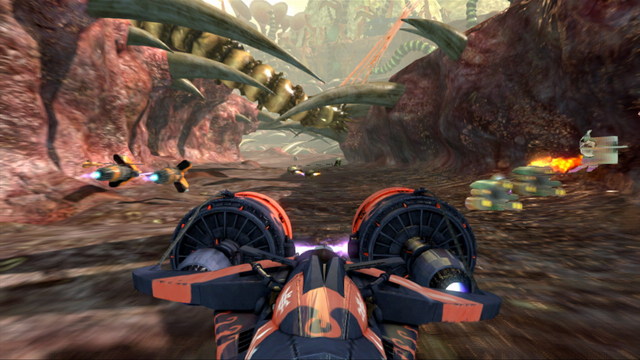 You get to compete across six races over five planets such as Tatooine, Bespin and Coruscant, unlocking additional pilots and podracers along the way. The aim of the Podracing section is to complete the courses, which then unlocks Sebulba at the end as your prize.

The final section of the game is called Rancor Rampage and is a pretty simple smash everything game. You get specific tasks to complete such as jump on enemies, clap your enemies between your hands, and destroy buildings and more, kind of like a 3D Rampage title. 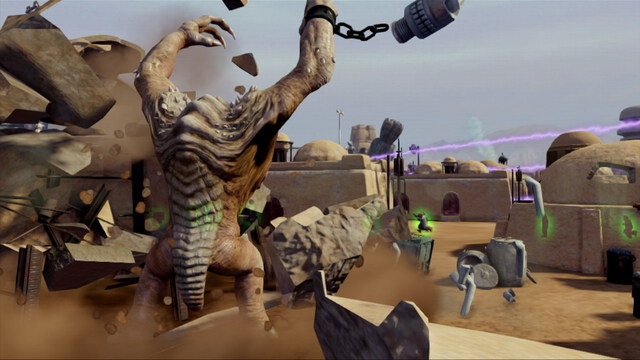 It isn't bad for what it is but it won't be a game that your return to very often. It was also one of the games that I found hard to perform in, Kinect didn't seem to match my movements very well, though this is likely to be due to the lack of space in our UK front room rather than anything else.

Graphically Kinect Star Wars can range from good looking to poor in a short space of time. Also for a title that was delayed from a Christmas launch and had around 200 people working on it, I would have expected to see a much better frame rate, especially during sequences with little going on around you. As expected, the characters are very cartoonish in style, close to those seen in the Clone Wars. There is nothing wrong with this and it fits in better with what the game seems to be trying to achieve. 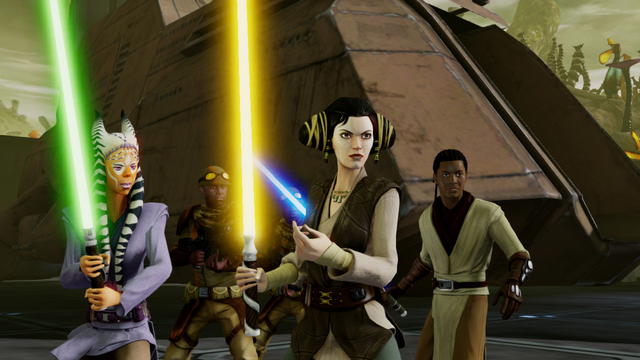 Sound is also a mixed bag, from some great and well-recognised voice work in the podraces to the poor C3PO voice-acting and iffy speech throughout the main “Jedi Destiny” mode. Music, as always with Star Wars games, is great if you enjoyed the films.

So from a personal adult perspective I didn't enjoy Kinect Star Wars that much, children on the other hand seemed to find it enjoyable in small doses. Don't get me wrong though as it isn't all bad, Podracing manages to bring some form of adult gaming into the fray and is enjoyable to boot.

I guess not aiming the title at core gamers, despite saying so originally in press releases and quotes may be more of an issue with Kinect itself rather than the idea of a motion controlled Star Wars title. This could be something that bites back at Microsoft, especially with so many Star Wars fans looking forward to the title.