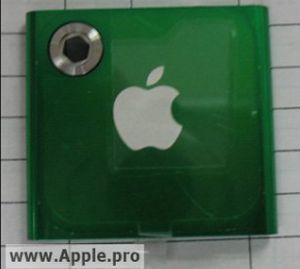 The next refresh of Apple's iPod line up of media players may still be several months away but a Taiwan-based site claims to have pictures of what the next generation iPod Nano will look like. The site, tw.apple.pro, seems to suggest that the next version of the Nano will retain the small square form of the current generation of the device.

The biggest change is the addition of a camera lens in the back of the Nano which, if true, would signal a return to having a camera or video recorded on the device. The 2009 version did include a camera-video recorder but the current version ditched it. The site claims that the camera will only have support for 1.3 megapixels so don't expect high-def quality images from the device. As Apple Insider points out, tw.apple.pro has been correct in leaking images and info for previous versions of the iPod Nano over the years.

Apple will likely revamp the iPod line up of media players, including the iPod Touch, iPod Shuffle and the iPod Classic, sometime in September, just in time for the holiday shopping season to begin. As we have noted before, it's looking likely that the new fifth generation version of Apple's iPhone won't be released in the June or July time as it has in the past. The rumor is that AT&T, one of the two US wireless phone providers that sell the iPhone, is already telling some of its customers not to expect the product to come out in June or July.