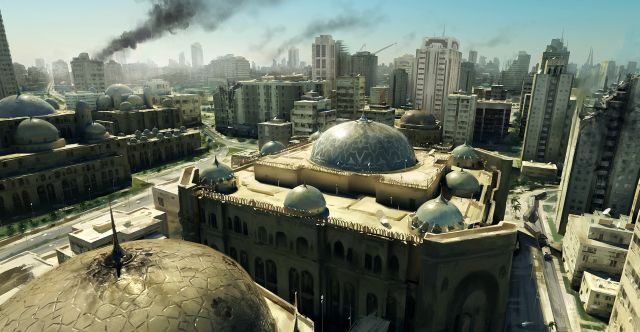 Today's blog entry concentrates on the remake of the Strike at Karland map including a concept art piece (shown above). The blog, which has an interview with the expansion's lead designer Niklas Fegraeu states that the Frostbite 2 engine will allow the map to have some new elements compared to the original. Fegraeu says. "I remember this particular building by the square in the original where players could defend very effectively. Now, with the destructive power of Frostbite 2, someone can just RPG that building and expose the defenders within. At the same time, we need to be careful not to add destruction that breaks the tried and tested game flow of the map."

Battlefield 3, due out this fall, will likely be going up directly against the next game in Activision's Call of Duty series which the publisher is still keeping a secret for now.