If you are a consumer and really want to buy a new PC with Windows 7 installed instead of Windows 8.1, you now have a deadline to meet. Microsoft has updated its Windows lifecycle page to show that sales of new PCs with Windows 7 Home Basic, Premium and Ultimate pre-installed on the computer will end on October 31. 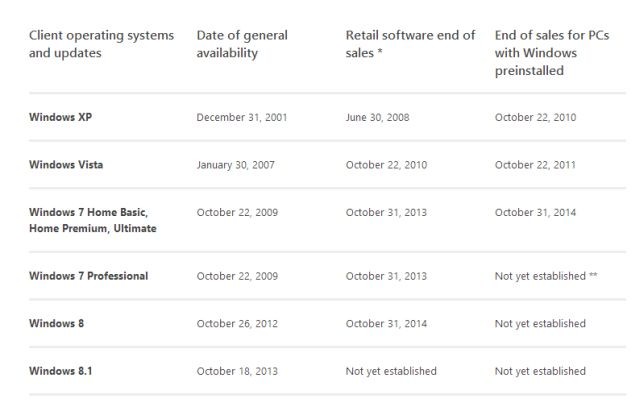 The lifecycle page on the official Windows website previously just showed Windows 7 all by itself, without showing any of its different SKUs. Today's change now separates the consumer versions of Windows 7 PCs from those that have Windows 7 Professonal pre-installed and are normally sold to businesses. Microsoft stopped selling Windows 7 as a stand alone software product almost four months ago.

Microsoft still doesn't have a deadline for the end of new PC sales with Windows 7 Pro installed but a footnote to the lifecycle chart does state, "Microsoft will provide one year of notice prior to the end of sale date." It's more than likely that Microsoft is giving businesses a little more time as they may wish to upgrade their PCs from Windows XP, which will stop being supported by Microsoft on April 8th.

Even though Microsoft is asking its OEM partners to wind up sales of Windows 7 PCs to consumers, there's evidence that a demand for those computers still exists. HP recently launched a small campaign on their website saying that a select few Windows 7 PCs were on sale due to "popular demand."