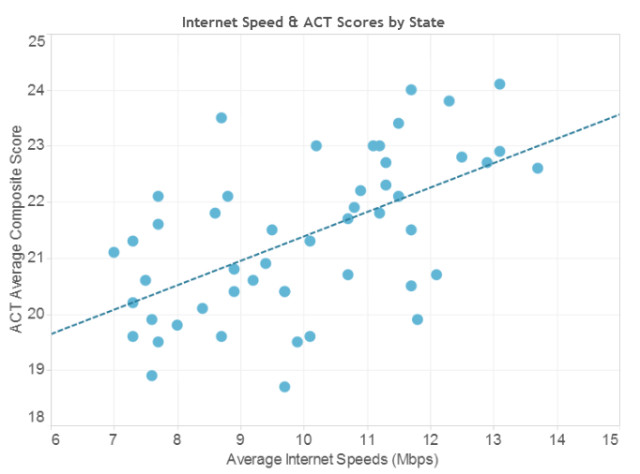 Research conducted earlier this month revealed the Microsoft headquarters in Washington has access to some of America’s fastest internet- a peak of 50.2 Mbps. A reliable high-speed could be crucial for tech companies and start-ups who rely heavily on the web to conduct business.

A recent study reveals a fast internet connection could also be home to smarter people. Analysis conducted by High Speed Internet reveals a correlation with higher scoring ACT achievers and states with the fastest internet.

A correlation of 0.57 revealed a link between higher scoring ACT students and states, such as American states with the fastest average internet speeds.

These states, which include Virginia, Delaware, Rhode Island and Massachusetts, all placed within the top 15 of the national high-school assessment. Microsoft’s home state Washington also registered in the top 15 with an average ACT score of 22.8, only 1.3 from the highest mark.  In contrast, students who live in states with slower internet connections- such as Alaska, Kentucky and West Virginia- did not place well.

However, many states proved to be an exception to the rule. Maine ranked 37th for internet speed while registering fourth in the test, whereas Michigan’s eighth fastest internet failed to make an impact on their students, who registered 41st on the ACT assessment.

The latest findings could debunk the idea that internet and technology are responsible for the declining intelligence of humans. Perhaps, these findings could even encourage educators to incorporate more technology in the learning process.