In March, Panos Panay, the general manager of Microsoft's Surface tablet division, told a group at a company summit meeting that while the Surface RT is a tablet, the Surface Pro is in fact a real PC. Now a cunning techie has proven Microsoft's point by completely replacing his huge desktop PC for the much more diminutive Surface Pro as his personal workstation. 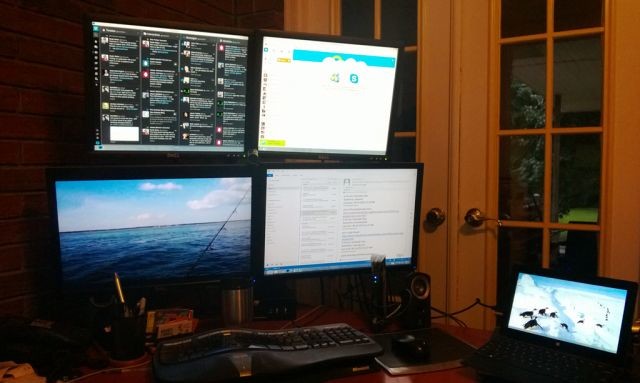 Keith Elder, who in his day job works as the Director of Software Engineering at Quicken Loans, posted proof of his project on his website this week. The small Surface Pro is connected to four large PC monitors (technically there's five monitors, if you include the Surface Pro screen itself).

So how did Elder do it? He connected the Surface Pro's USB 3.0 port to a $95 Plugable USB 3.0 docking station. Then he connected in a number of Plugable UGA-3000 video adapters to the docking station and hey presto; a four monitor workstation running off a 10.6 inch touchscreen PC.

Elder seems to be pretty happy with the situation, stating:

The Surface Pro is just the tip of the iceberg and I don’t see me buying a desktop ever again. If I can’t take whatever I buy with me it is useless in today’s world as far as I’m concerned.

In fact, he says that the upcoming release of Windows 8.1, combined with Ultrabooks with new power saving Intel processors will make things even better for people like him who want the power of a desktop PC with the portability of a notebook or tablet.