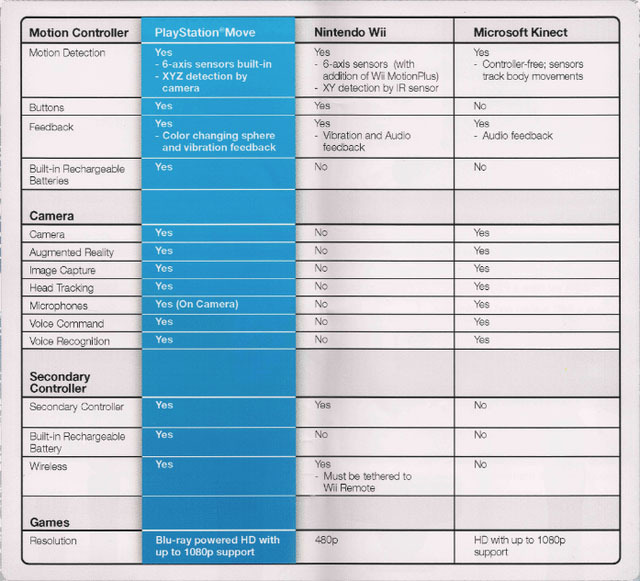 At the Sony Media Holiday Preview Event (SMHPE) held in New York, a media kit was given out to the people who where in attendance. In the media kit, was an image scanned by dualshockers, the image compares the different motion controls heading into competition this holiday season.

The SMHPE is primarily held to show off software, and this year was used to show the Move's games, and the way the Move works with existing games.

The controller is in direct competition with Microsoft's own motion technology, Kinect, and with it's price being announced earlier today, it is also clear that they mean business as well. Neither company has directly referenced each others controllers, until now.

It seems that Sony has started a more aggressive approach of promoting the Playstation Move controller to the gaming media, which will be available around the world in September.

Sony handed out the above comparison table to everyone in the media, that compares the Kinect, Move and Wii in a select few categorizes, including batteries, buttons and cameras. All the results are seen above, and an interesting personal note, they did not include any category that the Move does not get a "yes" in.

Dualshockers claims that the image was scanned from the media kit handed out by Sony, and that image above is a direct scan of the image available to the media.