Valve’s SteamVR platform is an amalgamation of software and hardware technologies; while Steam renders the VR experience, much of the hardware technology used in the HTC Vive was designed and developed by Valve as well.

SteamVR Tracking is one such technology; it’s a unique piece of work, relying on two base stations, or “lighthouses” as Valve likes to call them. These base stations contain a stationary array of LEDs coupled with two active laser emitters spinning and blinking sixty times a second, and bombarding an area with infrared light.

The devices – like HTC Vive and its controllers – are covered with tiny photosensors capable of detecting the flashing LEDs as well as the laser beams. Valve’s tracking itself is based on mathematics: when a flash occurs, the headset starts a stopwatch that counts until the subsequent laser beam hits the headset; extrapolating from the relation between where and when the laser hits the headset, the device can determine its exact position and orientation relative to the two lighthouses.

It’s a much more precise solution compared to the Oculus Rift, which relies on old-school cameras. However, it’s also complicated and involves quite a few moving parts; Valve is now refining its tracking technology while adding a couple of new features.

SteamVR Tracking 2.0 rids itself of the stationary LED array that, per Valve, drove manufacturing costs significantly higher. Instead, the new base stations rely on just the two spinning active laser emitters – which can now encode and transmit data within the laser beams. This allows the VR headset and the controller to learn about the source of a laser beam and significantly reduces interference between base stations.

With reduced interference, SteamVR Tracking 2.0 can now support more than two base stations, allowing users to create a larger VR play area – perhaps even spanning multiple rooms in a house. Since the new base stations rely on fewer components, they can be smaller, lighter, quieter, consume less power, and most importantly – cost less to manufacture.

Unfortunately, there is a slight issue: SteamVR Tracking 2.0 base stations are not backward compatible with older VR headsets like the HTC Vive. However, the newer headsets – like one being developed by LG – can work with the older base stations, minus the new features. 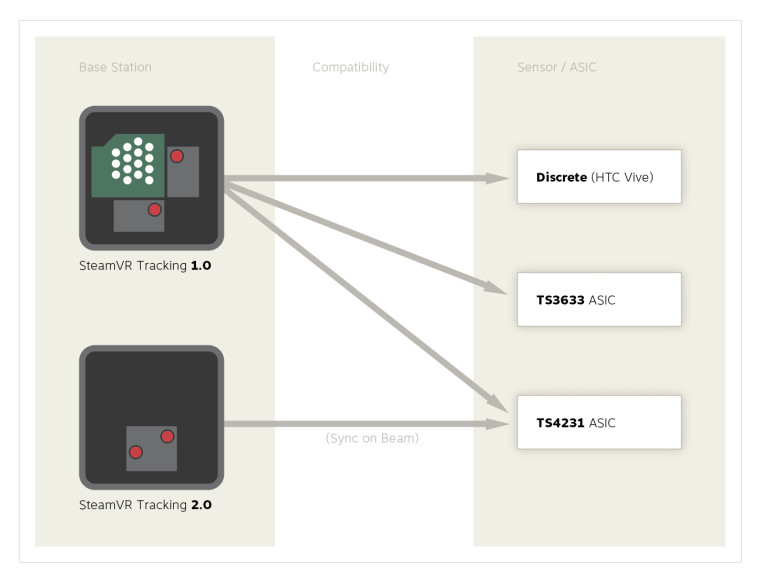 Valve says that it no longer recommends the old tracking design for newer VR headsets, but the new SteamVR Tracking 2.0 base stations are still in the evaluation phase. A more detailed roadmap will be available later this month, once the evaluation period is complete. However, Valve does say that it expects these new base stations to go into mass production by the end of this year.

At the same time, Valve is also developing three “full” VR games in-house. It’s been quite a few years since Valve has developed and published a game, with the company relying on the Steam Store as well as Dota 2 and Counter-Strike for most of its revenue.

Quite a few writers have left the company as well, taking away some of the greatest writing talents from the company. Alas, that won’t stop Valve from continuing its VR endeavors.