When Vista launched, Microsoft expected a wave of change to launch with it. The new, fresher look and feel that Windows Vista brought with it (teething problems aside) should have inspired PC manufacturers to take another look at their designs and come out with something amazing.

However, that never happened. Perhaps Microsoft already knew it wasn’t going to happen, which could have been why they had a team at work on an ‘Industrial Design Toolkit’ which should have provided the OEMs with everything they needed to make great Windows PCs. Even that wasn’t enough though.

Microsoft had high-hopes for the look and feel of Windows Vista PCs.

The focus was specifications and price over quality and design, and those that wanted that latter had few places to turn. ASUS and Sony were producing some nice looking PCs (although that's subjective), but they still looked and felt like PCs. The PC industry pushed value out as a mix of high number-values in specifications, and low price tags, which never really indicated quality. In fact many people had horrendous Windows Vista experiences due to woefully under-powered PCs being classed as “Vista Ready”… or was that “Capable”? Through all of this time, Apple was on the side, making the machines that consumers secretly dreamt about and they sold that story through a series of clever and unrebutted (well, hardly) TV advertisements.

The media noticed this trend towards low-quality devices, and that Apple was determined to stay out of that race (to the bottom). APC Mag made a lot of good points (and some bad ones) in a 2008 "15 reasons Macs are still better than Windows" article, and Apple topped Forrester's PC satisfaction rating for that same year. Apple sales increased, as PCs continued to look as confusing to consumers, with specifications and price being pushed over functionality.

By the time Windows 7 launched, not a lot had changed. HP had just began to invest in their Envy line, which were nice looking machines, but appeared to be closer to clones of Apple products than original competitors – and the rest of the industry hadn’t made much progress either. The value war continued to rage on, and consumers were becoming increasingly frustrated in their search for PCs that would allow them to visit Facebook, YouTube, eBay, and to check their emails. Yet Microsoft had learnt from previous experiences, and this time it pushed PC manufacturers are a lot harder to get everything in line – from drivers to marketing. Microsoft seemed to be winning the battle, and Windows 7 itself was winning praise from everyone.

Yet Apple wasn’t playing around. After years of watching Microsoft toy with tablets, Apple launched its iPad. The iPad took (and is still taking) the world by storm. Microsoft and its partners knew that even the acclaimed Windows 7 just wasn’t up to the task of successfully powering a consumer-oriented tablet – so they turned to Metro for the answer, and the result was Windows 8. Of course, this wasn't Microsoft's first attempt at creating a Microsoft tablet. Windows XP had a tablet edition, and of course there was the Ultra-mobile PC and the fabled Courier device. Windows 8 was a product of lessons learnt from those projects, and took more than a few design cues from Windows Phone 7.

With the exception of Microsoft’s Surface RT and Pro devices, Windows 8 was launched with a similar crop of same-old PCs from the big OEMs. Sure, Samsung has picked up their game a lot in design, and a few of the other OEMs have made some interesting products – but the shelves of every electronic retailer are still full of uninspired designs, confusing specifications, and special offers. Even with the ability to launch all new touch-first devices, the OEMs have failed to deliver. Some metres to away, the Apple bench, with its polished wood surface and glowing logo still looks as good as ever.

The OEMs need to learn that whether it’s with Windows, Android, Linux, or some other future platform, the only way to win people’s hearts and minds is through good design and execution of products and marketing. Simply packing the most numbers possible into a generic plastic case, and pricing it as low as you can is not a solid marketing strategy. Apple changed the game, and average consumers no longer care, and don’t want to learn what terms like quad-core, GPU, multi-touch, IPS, OLED, etc. mean. 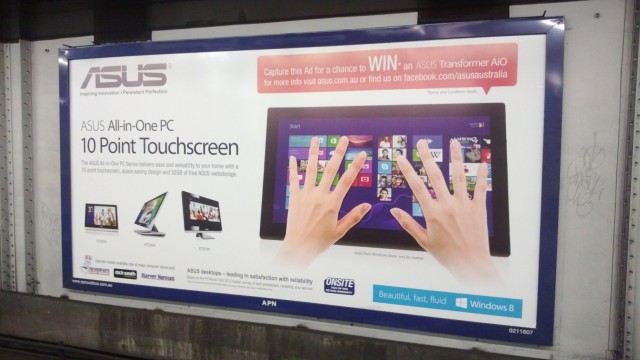 ASUS: Why use your old 9-point touch screen when you could have 10 points?

Sadly, whilst it appears that Microsoft is leading the charge with Surface – and a few of its partners are following suit, many more have a long way to go. A poll by PC advisor earlier this year still shows that Apple products are considered to be the most reliable of all computers, and Amazon’s top-rated notebooks list tells the same story, and the same story can be found in CNET’s top-rated list. Take a look at the specifications on these machines, and you'll see why. Apple isn't just charging for a pretty case, they're also spending a lot more time thinking about the insides of those computers.

Of course, there is one other way that Microsoft could go. They’re now in possession of the skills and facilities to design, manufacture, and distribute tablets. So, would moving into computers (or smartphones) really be that much of a stretch? Although it might be fair to say that Microsoft has never really put enough effort into persuading it’s OEMs to make better products (excluding phones), time is running out and it may be the right moment for Microsoft to give up on its OEM-centric mindset and make that move.

If Microsoft takes the time to build a solid family of devices, including a phone, notebook, and at least an all-in-one PC, they have a good chance at saving face and showing that a Windows PC doesn’t have to mean lacklustre and uninspired design. Despite the occasional issue (and ignoring the red ring of death fiasco), many people seem to like Microsoft’s designs. Of course, hardware is only a part of the story, and Microsoft’s clearly still working on the software part of the puzzle - but if they play their cards right, it could be VaporMG-clad Microsoft PCs sitting on the trendy desks of the future.