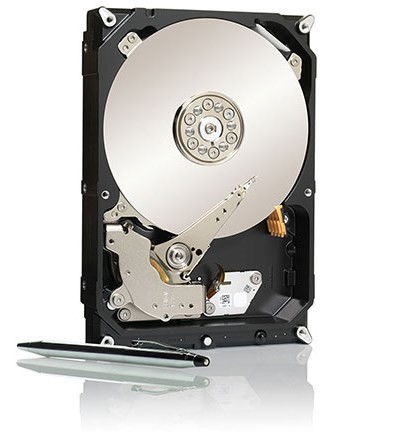 Seagate has brought out what they claim to be the industry's first 4TB hard drive utilizing four 1TB platters; and according to a representative of Seagate "the four-platter design is a winning one that allows for the highest performance possible while doubling capacity and reducing costs, ultimately giving consumers the best of all worlds."

Seagate told MaximumPC its 4TB drive is nearly 800,000 times larger than the first desktop drive it introduced way back in 1979. There's enough storage space to store 800,000 photos, 450 hours of HD video, or over 1 million songs, "all at the lowest cost per gigabyte in the industry," Seagate says.

At 146MB/s the drive also boasts the highest average data rate of any desktop HDD currently on the market. It's not power hungry either, it consumes 35 percent less power than the competition, Seagate claims. Other features include 64MB of cache and a 7200 RPM spindle speed.

You can find the drive online in retail for as low or lower than $210 shipped, or for around $190 for the bare drive (OEM).