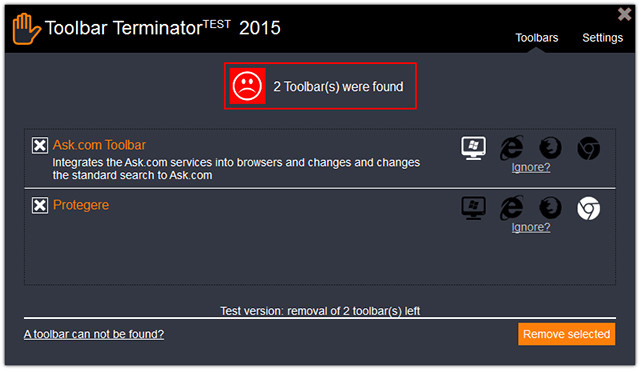 Get rid of annoying Toolbars!

Almost everyone who downloads and installs Windows applications has already met those crappy guys: Toolbars. They integrate into your browser during installation, change your start page settings and partly take control over your browser. They sometimes even install malware on your system and open dangerous backdoors. Most of these Toolbars won’t let you uninstall them properly. Instead they deeply integrate themselves into your system and even PC experts often have a hard time to fight them.

ToolbarTerminator scans your PC for toolbars on each Windows start and shows you all of them in a neat dashboard allowing you to remove them easily. It perfectly protects your system against unwanted toolbars.

Toolbars are constantly evolving and are re-appearing in new versions – similar to viruses. Abelssoft helps you to find them by keeping ToolbarTerminator up-to-date with its new “ToolbarDefinition” updates. This service is free of charge for you!