The Tronsmart Draco AW80 Android box made some waves last month after it was revealed that it scored over 55,000 in AnTuTu. I have a long-standing interest in Android TV sticks and boxes so I was fairly excited when given the opportunity to review it.

The Draco AW80 measures 164mm x 164mm x 27.5mm. Although much larger than other Android TV boxes I’ve played with, it doesn’t waste the extra space. Aside from the external non-removable antenna, it has several ports including Gigabit Ethernet, two USB 2.0 ports, a USB 3.0 port, optical audio, a full-size HDMI port, full SD card port, female SATA port as well as a 3.5mm headphone jack and AV port. For those not familiar with 3.5mm AV ports, they look like normal headphone jacks, however the wiring has three slits on the male connection rather than just two. The third slit carries video, which translates into the normal RCA connectors. It has a built-in IR receiver, as well as Bluetooth 4.0 and 802.11ac WiFi support. The device comes with a DC 12 Volt/2 Amp power brick which plugs into the back of the device via a 5.5mm DC-in. 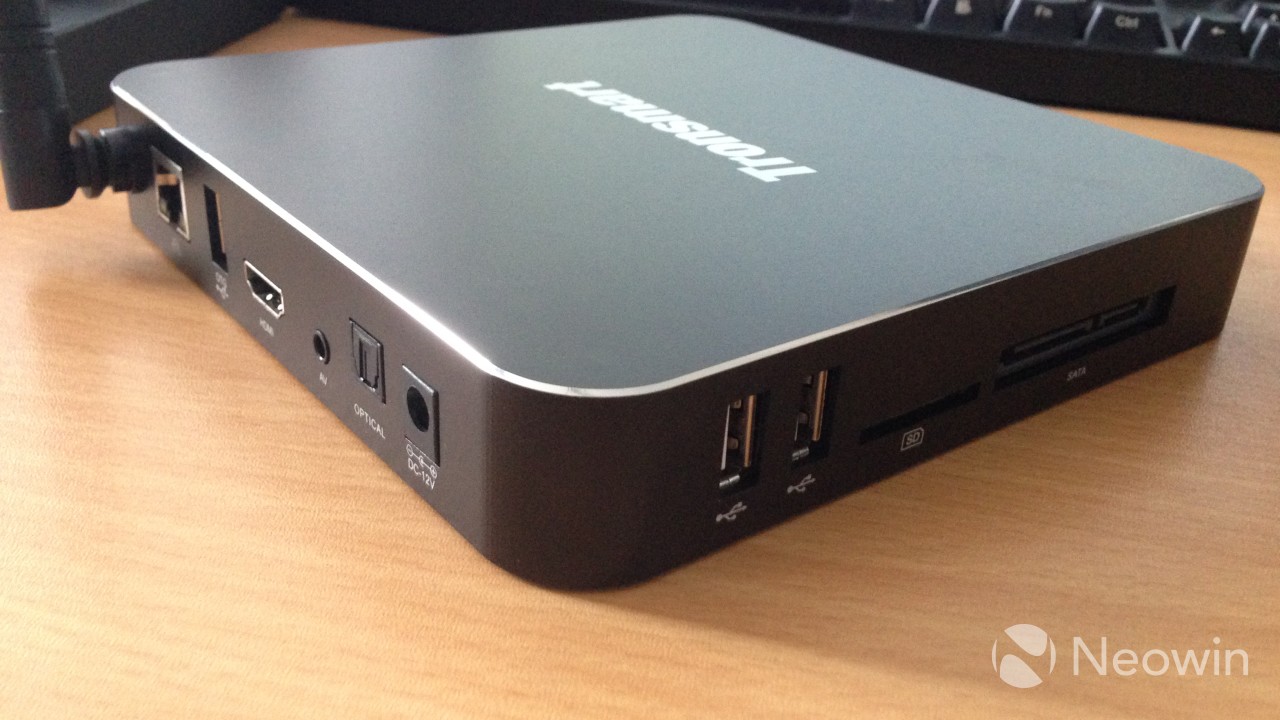 Throughout testing, even during benchmarks, it never became more than slightly warm to the touch. This is because the entire case is made out of aluminum which disperses heat fairly well.

The Tronsmart Draco AW80 has an eight-core Allwinner A80T chipset, based on ARM’s big.LITTLE technology, which has a maximum clock speed of 1.8 Ghz. Basically this means that it has eight cores in total, however, only four cores are used at any specific time.

All eight of the cores are based on ARM’s v7 architecture, however, four of the cores utilize the updated ARM Cortex-A15 architecture that provides significantly better performance. Which block of cores is used depends on the intensity of the operations being executed.

The GPU is the 64-core PowerVR Rogue G6230 which is fairly powerful and supports more modern technologies like H.265 and 4K video. The Draco AW80 has 2 GB of RAM (although CPU-Z reports 1.6 GB) and 16 GB of internal storage. Running Android 4.4.2 KitKat it also supports things like OTA updates. Its worth mentioning that the review version I received featured the lower specs-- there is a second version with higher specifications, such as 32 GB storage and 4 GB RAM. 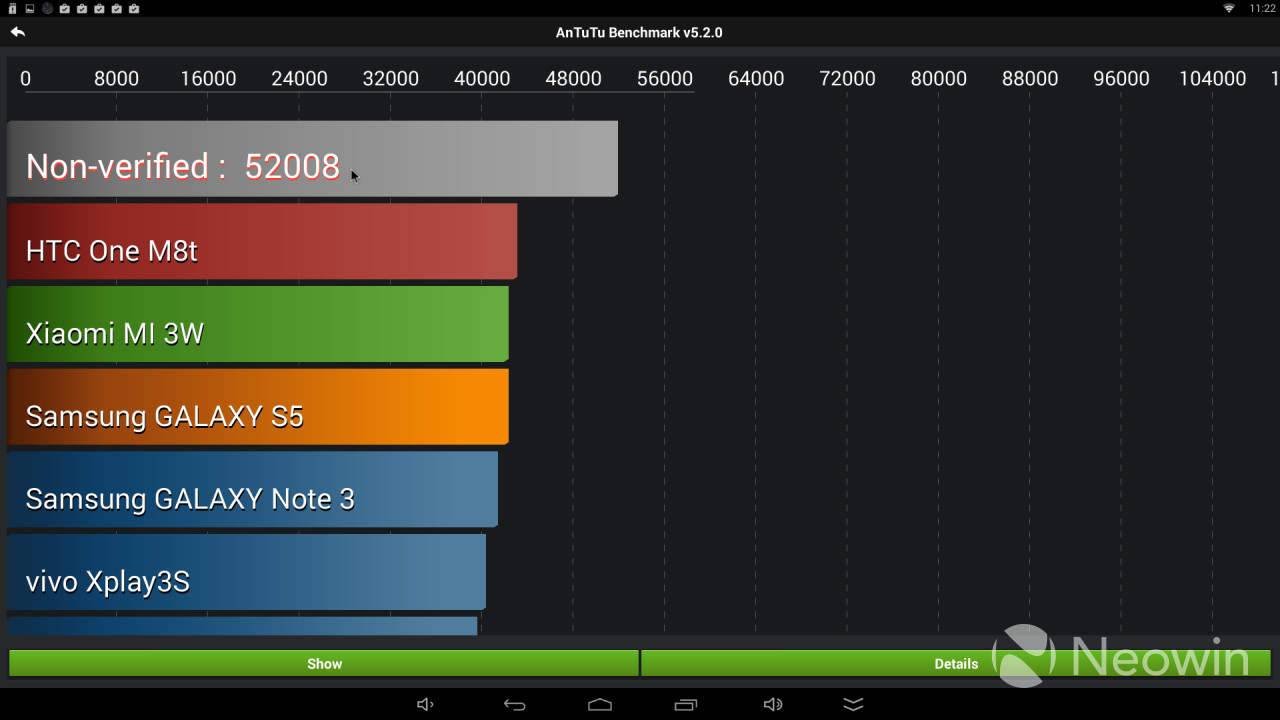 The device was fairly strange when it came to benchmarking, and there are obvious signs of manipulation on AnTuTu. The normal version of AnTuTu reported over 52,000 points, however a different version of AnTuTu (designed for Chinese smartphones, apparently) reported a little over 35,000. The results on 3D Mark weren’t very impressive either and I wasn’t able to get Quadrant running at all. I’m not sure if this is because there really is something devious going on or if it’s simply a driver or firmware issue. Regardless, I let the real-life performance of the device do the talking rather than just relying on benchmark figures. 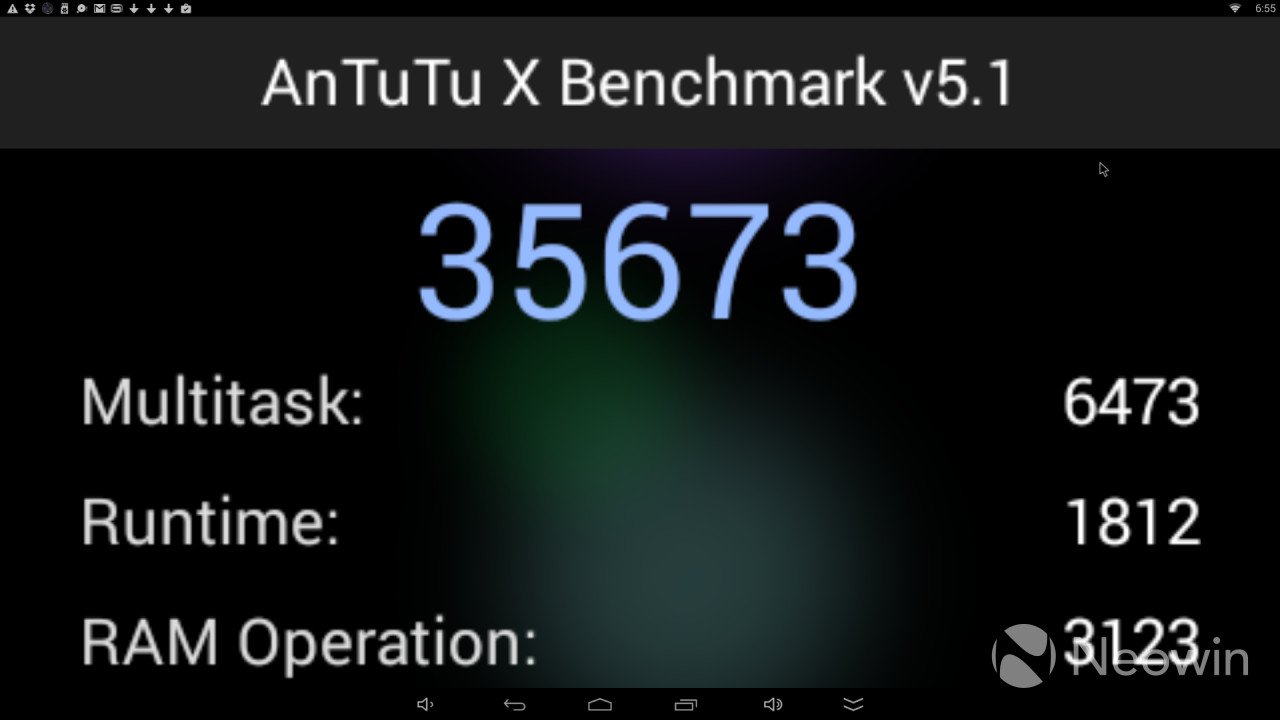 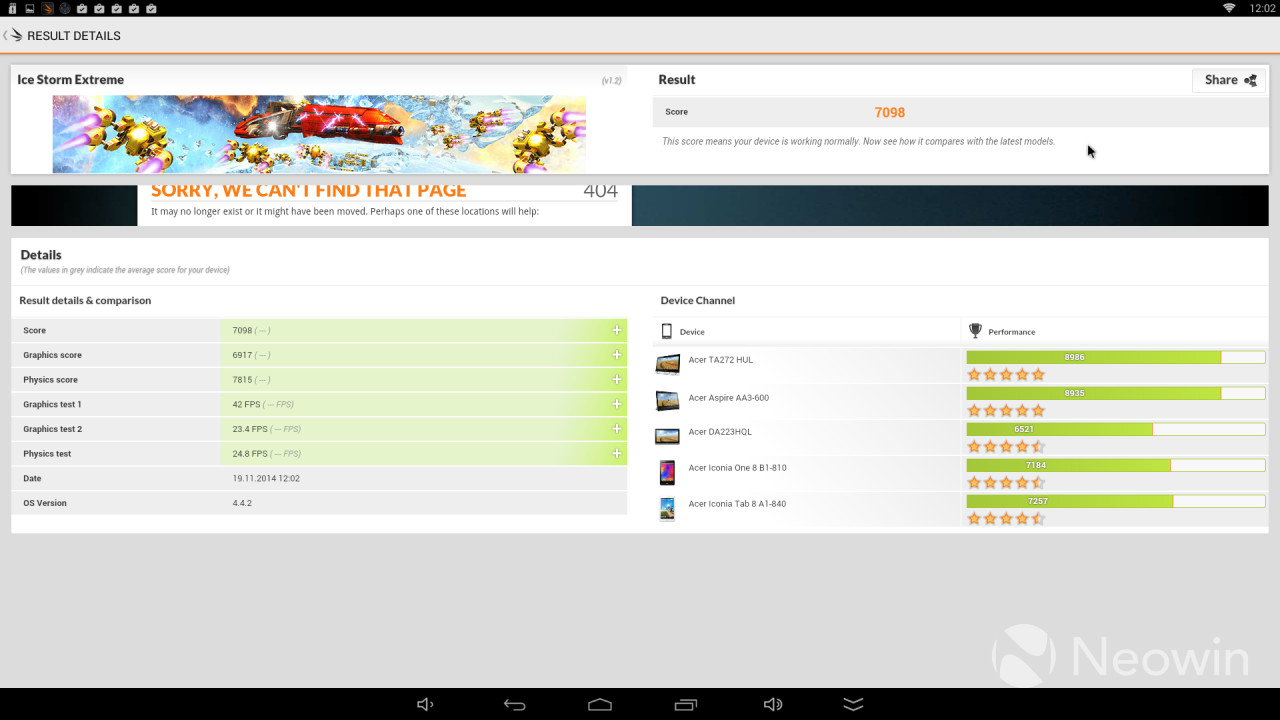 There is in fact support for hardware acceleration on apps like XBMC, for those interested, so naturally 1080p playback was very smooth and there were no slow-downs at all. I plugged in an external HDD into the USB 3 port and it took just a couple of seconds for XBMC to index the entire 1.5 TB or so worth of video, film, photos and audio on there. Movies started playing less than a second after choosing them, and seeking throughout the films is just as quick. I tried enabling deinterlacing midway through a 1080p film and there was a little stutter at first, but everything was extremely smooth after that (including seeking). 1440p video also had a similar level of performance. 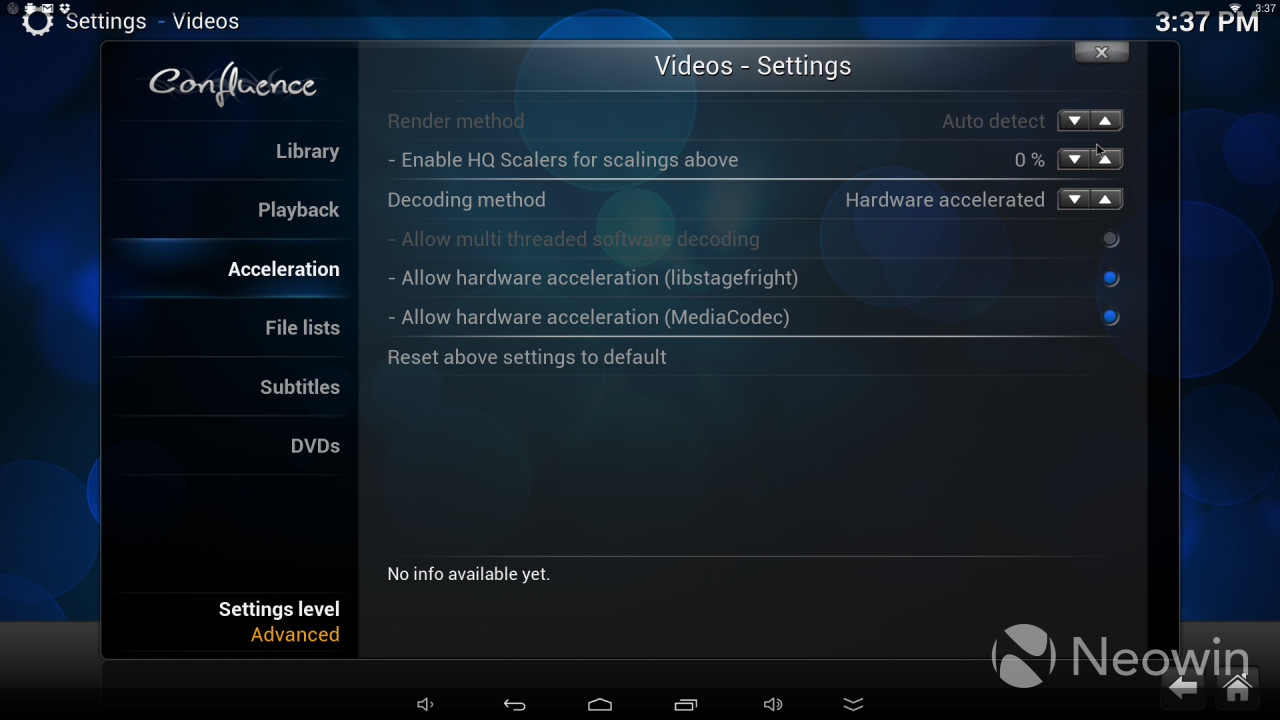 I ran into issues with Asphalt 8—changing the quality of the graphics breaks the 3D graphical engine completely. It seems like the issue is typical of the chipset inside the device, as other people appear to be experiencing the same thing in other devices.

What is weirder, however, is that I noticed at a “low” setting on Asphalt 8, the game’s graphics and gameplay was actually rendering as “high.” Regardless, though, the game was extremely smooth. It didn’t lag at any point which is very reassuring given the confusing benchmark results.

I played Real Racing 3 but it had a similar glitch to Asphalt 8-- a graphics issue where the paint on the cars was sometimes glitchy. The game is still completely playable, however.

I also played GTA: San Andreas and that was very lag-free with all of the settings turned to maximum. There was the occasional lag for a second or two every half hour or so but that could be attributed to something Android is doing (such as syncing in the background) rather than the GPU not being able to keep up.

The Android version it comes with is largely stock, save for some simple additions like volume soft-buttons. This is both a blessing and a curse: it's a blessing because customized firmware almost always, without failure, sucks. However, it's a curse because the stock Android firmware was designed for touch-screen usage and not for an IR mouse, such as the IR mouse provided.

There are obvious scale issues where, even at the maximum setting, the text on menus and the like is still barely readable on my 50" TV. There is hope, however: part of the beauty of Android is that you're able to customize it if you need to, and in this case I did. I found a Windows 8-styled launcher on the Play Store called SquareHome.Tablet. It has a few bugs (especially when it comes to styling the icons) but it is largely bug-free when you're done setting it up. It looks a lot like Windows 8, which means it has large tiles instead of small icons and that it's fairly natural to use with an IR remote-- perfect for this device.

If you have any Android TV stick or box with a bad launcher, I really can't recommend this launcher enough! Check out the images below. The alternative is to set an app like XBMC to boot on launch and treat that as your launcher. 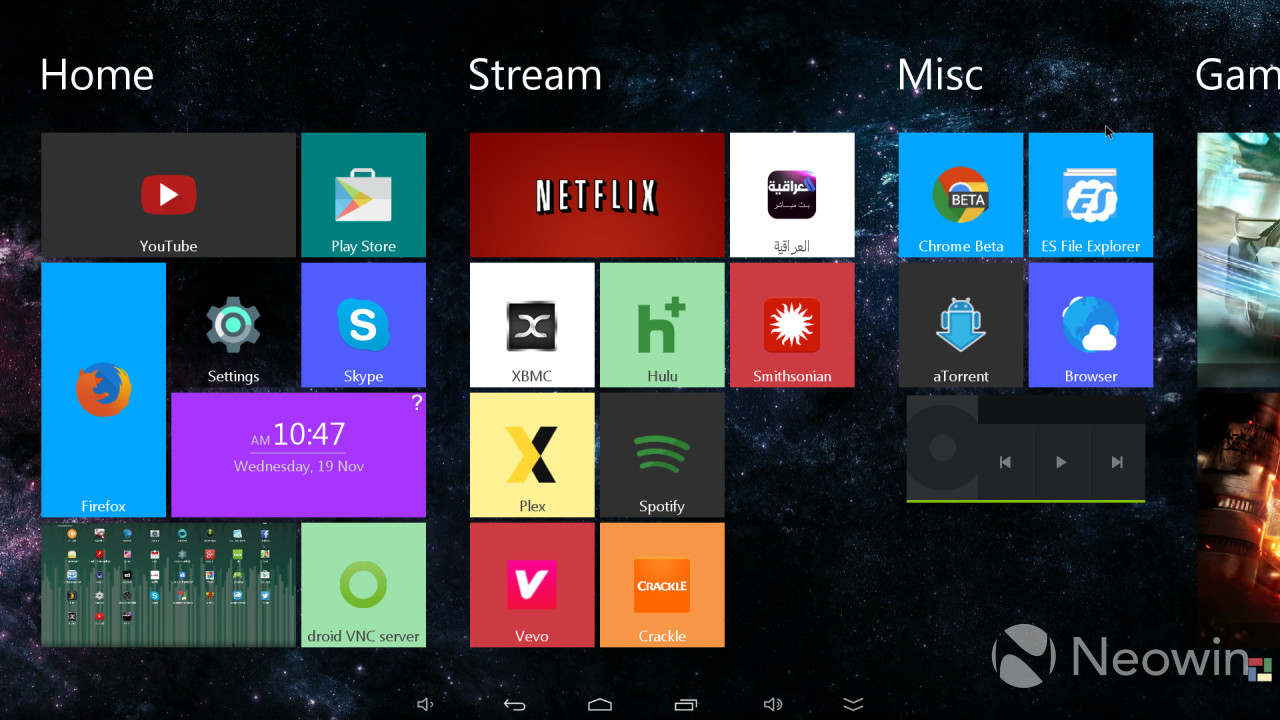 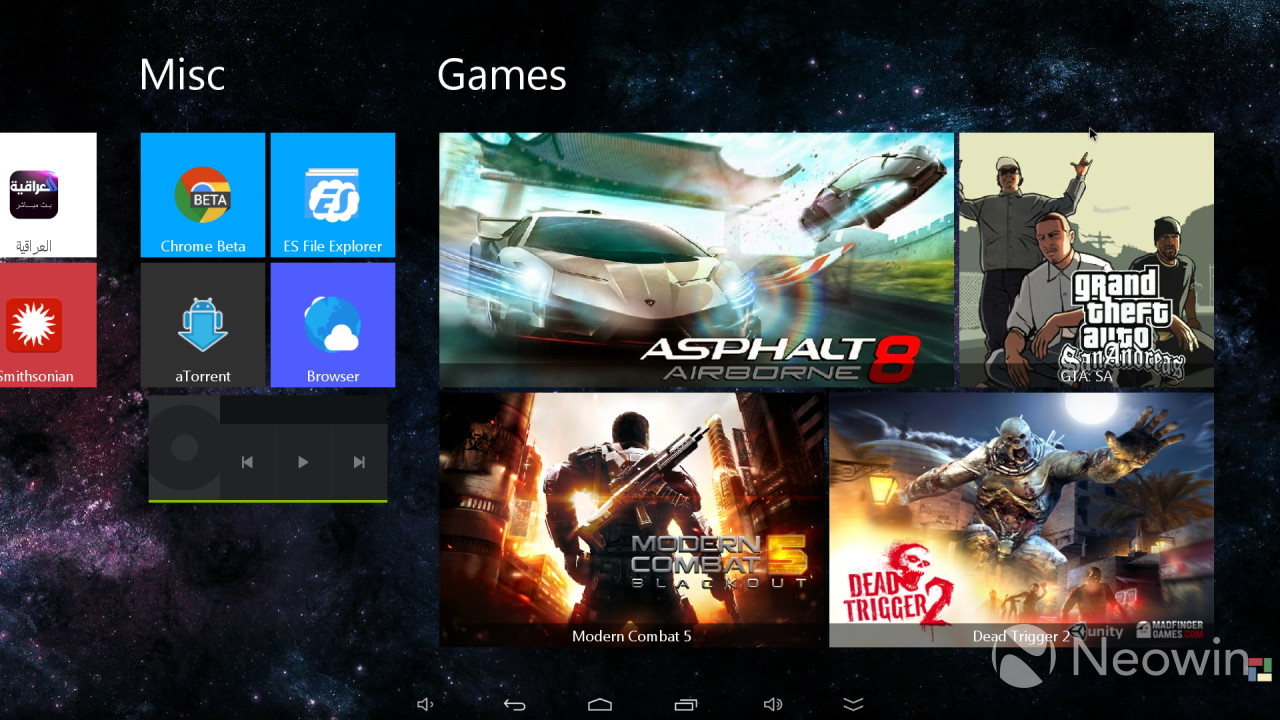 The software the device comes with is not too bad at all. It includes Skype, Plex, XBMC, Netflix, Hulu and Spotify, as well as some root-only apps like ES File Explorer and SuperSU.

Oh, that's right, did I mention it came pre-rooted? This was an extremely refreshing decision on behalf of the manufacturers who usually make rooting these devices extremely difficult. I was able to install Sixaxis Controller-- a root-only app I use that allows me to use a PlayStation controller as both a universal gamepad and mouse-- within minutes of first booting the device. The device included a few social media bloat apps like Facebook, Google+ and Myspace (yeah.. Myspace) as well.

I plugged in a USB webcam and was able to Skype as normal which was really cool, and apps like Netflix and Plex worked without issues.

Some apps were not available on the Play Store for the Tronsmart Draco AW80, such as Crackle and the Smithsonian streaming app, but I was able to side-load them with no issues. For those unfamiliar with the term: side-loading is the practice of downloading an app from a third-party source and then installing it on the device yourself. It might sound complicated, but it's really just three or four more clicks than it would take installing something via the Play Store.

For those interested in DLNA, AirPlay or Miracast, the device offers out-of-the-box support for all of them. 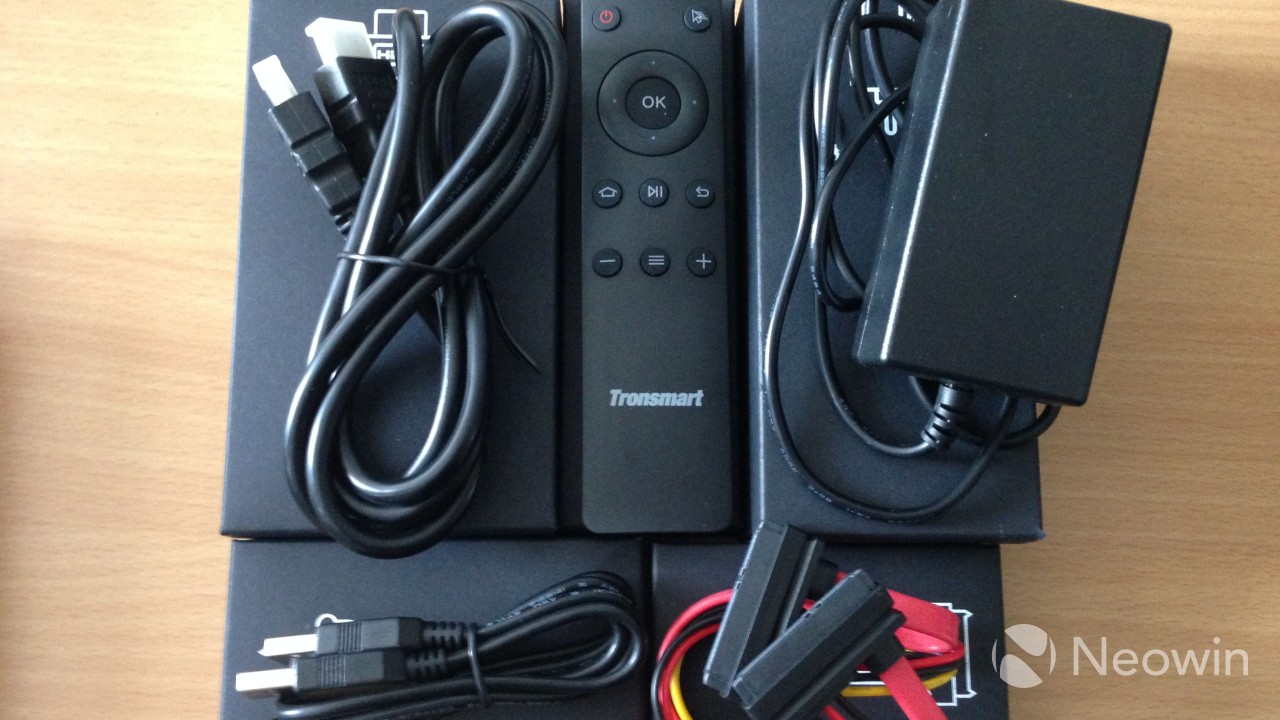 The included IR mouse is largely useless for anything serious. I'd advise any buyer to invest in a PlayStation controller (official or unofficial) and Sixaxis Controller app or some sort of gyroscope remote. As mentioned earlier, I almost exclusively use a PlayStation controller to interact with the device and nothing comes close (especially when it comes time to play games and I can instantly start playing with an actual controller). 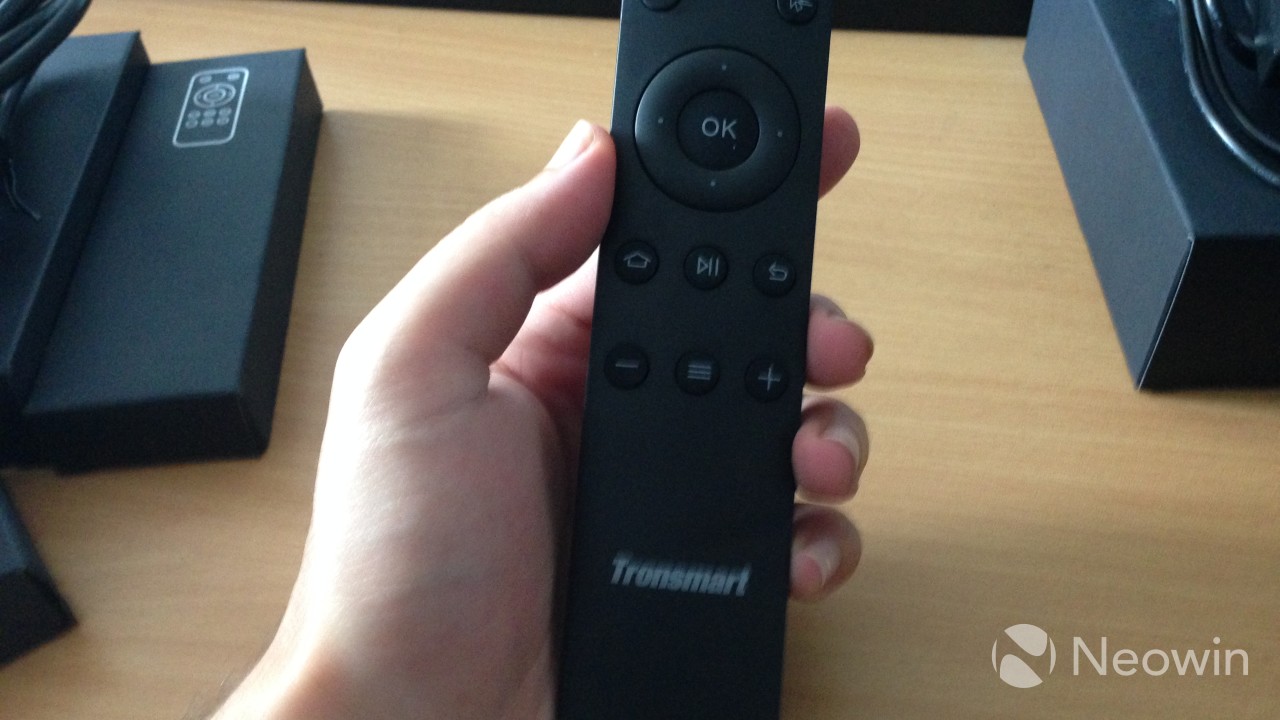 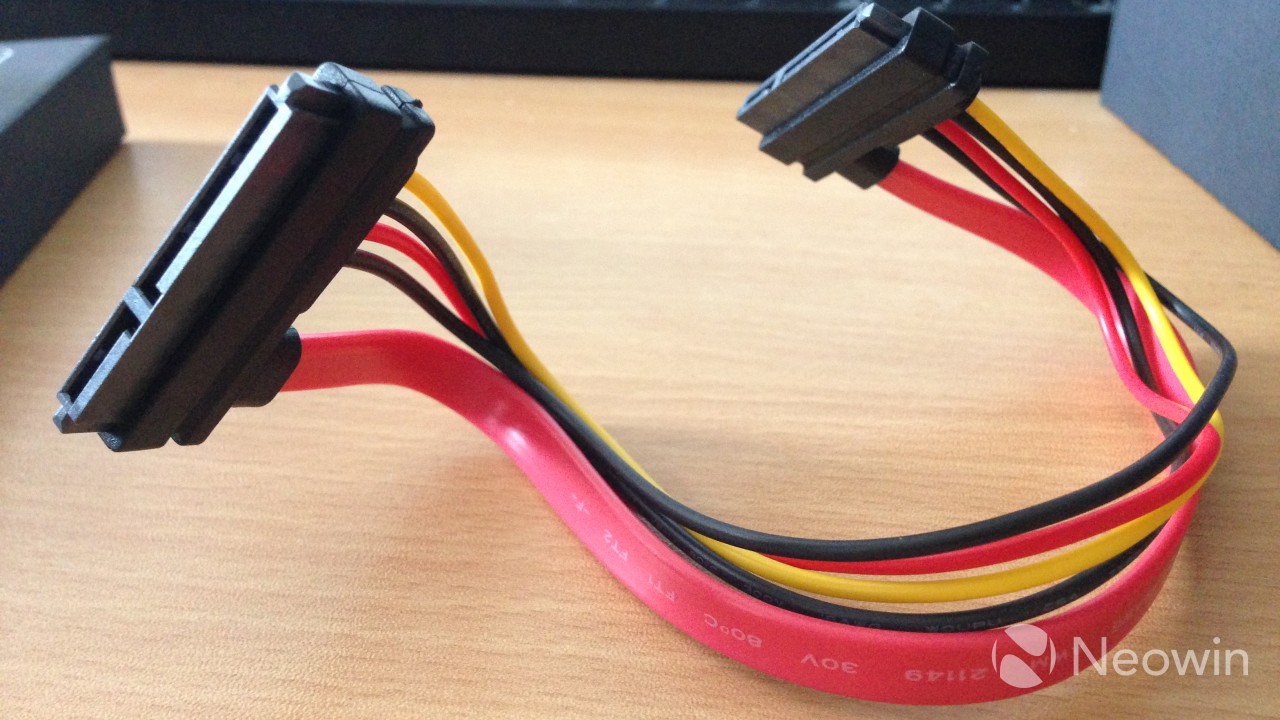 The device also comes with a SATA cable which allows you to plug in external storage directly, and I've ranted about how it looks before. It's hideous, and I'm not sure why the manufacturer thought it would be a good idea. An eSATA port or extra USB 3.0 ports or something would have been much, much more useful.

The firmware it comes with seems like it needs a little work, as noted above with the graphics issues. The device is still extremely new and hasn't received any updates yet, it's likely that those will come later as the manufacturer has gone out of their way to provide OTA update functionality, and the manufacturer has also promised a working Linux image for it to be released this month.

I'm really disappointed with (what appears to be) AnTuTu manipulation as it doesn't make sense as to why they did it. 35,000 or so is still a very reasonable score and the video playback performance spoke for itself. Stable 802.11ac WiFi, BlueTooth 4.0, up to 4 GB RAM... these things are all surprisingly unique for this class of device, and the manufacturer didn't have to shoehorn their way into people's attention with manipulated benchmark scores.

Its these things-- the high-quality specs on the device-- which make me question if it was intentionally manipulative or if there was some sort of firmware/driver issue. I think Allwinner-- the SoC manufacturer-- would be the one to blame, because these AnTuTu hacks would need to take place at the kernel level, and various other devices with the Allwinner A80T chipset (such as the Onda V989 tablet) reported similar AnTuTu scores. Regardless, though, it is disappointing.

That being left aside though, this seems to be a pretty great device, especially if you're after something to supplement your TV's smart features. It plays back video extremely well, the WiFi is very stable, and with a few tweaks the layout becomes perfect. I would, however, like to see firmware updates which fix the graphics issues I experienced in some 3D games before I would be able to give it a higher mark.

A big thank you to our friends at Geek Buying who supplied the device for this review. If you are interested in picking one of these up, Geek Buying has the device available for sale for $149.