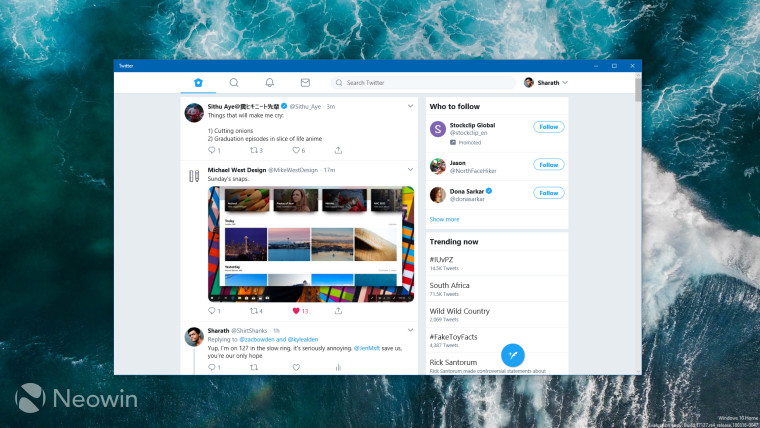 In what may seem unusual, the Twitter app on Windows 10 Mobile is being updated today to the Progressive Web App (PWA) version that was recently released to Insiders on Redstone 4. However, the app cannot be called a PWA for mobile, since the very technologies and functionality that make the app a PWA, aren't supported on Windows 10 Mobile.

Windows 10 Mobile is no longer being developed actively and is currently serviced with monthly security patches through cumulative updates that are released roughly on the second Tuesday of every month. The Twitter PWA on PC leverages technologies such as service workers and more, coming with the Windows 10 April 2018 update rolling out today, that let the app tie-in with the operating system, enabling features such as push notifications, Live Tile support etc. Windows 10 Mobile, however, doesn't support any of these technologies and likely never will, and hence, it cannot leverage native functionality that the earlier UWP Twitter client offered.

Though the update brings with some newly introduced features such as the increased character limit, ability to bookmark tweets and more to mobile, it breaks some of the app’s core functionality, such as push notifications, Live Tile support and dark mode.

It is a possibility that the update was pushed out in error. However, it isn’t unusual for Twitter to align rollout of new versions of the app with the rollout of major Windows 10 updates. It is to be seen if the update is rolled back for Mobile in the near future.