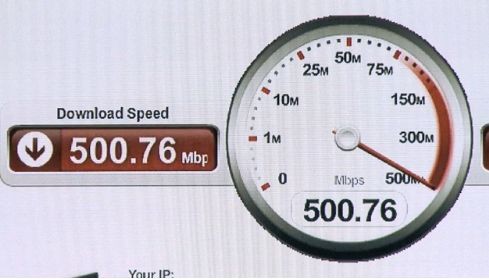 While only a few places in the U.S., including Kansas City, currently have ways to sign up for a 1 Gbps Internet service, a lot of cities in the country can sign up to use Verizon's FiOS service. Today, the company announced a new top speed tier that, while not up to the 1 Gbps speeds that Google Fiber offers, is still much faster than what other ISPs have available.

Verizon's new stop speed for FiOS is 500 Mbps for download, with a still speedy 100 Mbps for upload speeds. While Verizon's announcement does not reveal the pricing for this new speed, DSLReports.com has a post from a customer on their message board who managed to find out that it will cost a pretty penny; $299 a month.

In its announcement, Verizon tries to show that faster Internet speeds will help both consumers and businesses. It states:

While these speeds may not be standard for most (today!) let’s look at the bigger picture: the evolution of technology and the importance of broadband. The average U.S. household currently owns 7 internet connected devices, according to The NPD Group and that number will only continue to grow. By 2022, the average household with two teenage children will own roughly 50 Internet-connected devices, according to the Organization for Economic Co-operation and Development.

With Verizon now offering this faster speed tier, even with its premium price, you can expect other ISPs like Time Warner, Comcast, Charter and others to follow suit in the near future.