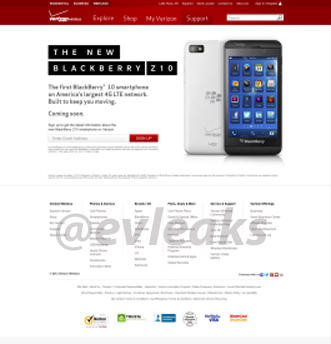 RIM is on the cusp of releasing its latest OS/phones and Verizon is getting ready for that launch according to a new leak. The image you see above is a holding page that will go live soon that shows the new Z10 that RIM will be releasing and it will be headed to Verizon.

It is encouraging to see that RIM is finally going to be shipping its new platform that has been delayed several times. For RIM, this release will make or break the company as the Canadian vendor has been shedding marketshare at incredible rates that past few years and has yet to find a way to slow the losses.

RIM is betting heavy with the Z10 and if the platform receives anything less than high marks, it could be the final nail in the coffin for the comapny. With that being said, if RIM can finally deliver an innovative platform that excites consumers once again, it should be able to turn the ship around rather quickly as Blackberry has a loyal following.

BB10 is slated to be released later this month on January 30th.