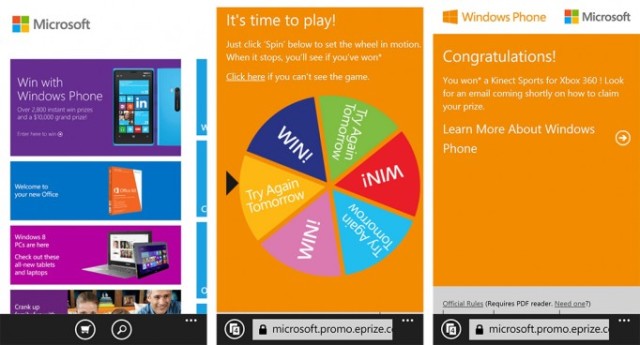 It’s no secret that Microsoft’s Windows Phone platform has been slowly growing. Indeed, it overtook Blackberry as the third place smartphone just a few days ago, although it still has a long way to go to overtake Apple and Google.

If you didn’t win the $600 million Powerball jackpot last night, maybe you’ll have better luck winning a prize in the Microsoft Phone store app instead. According to WPCentral, the official Microsoft store app has a new tile entitled, “Win with Windows Phone.” When you select that tile, a spinner with six tiles opens up. Spin the wheel, and you have a 50% chance of winning a prize. Although the list of prizes hasn’t been released, WPCentral mentioned that they’ve seen prizes such as Microsoft points, Kinect Sports, and Halo Reach. The app is a free download from Microsoft's site and, while you can enter once a day, it's unclear how long the contest will be around for.

Now for the bad news: Unlike a traditional Neowin contest (such as the current Lumia 520 giveaway we’re running), Microsoft’s latest contest is only available in the United States. That said, if you win something we'd love to hear about it!