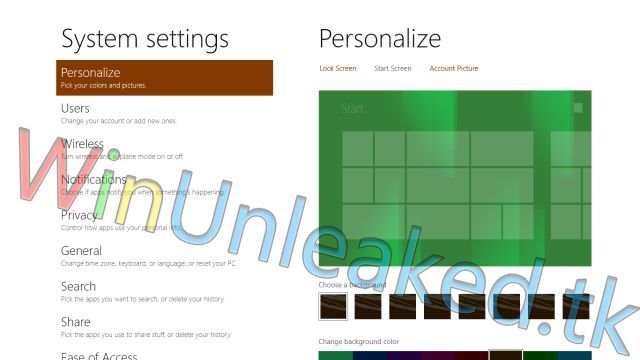 Windows 8 pre-beta screenshots continue to be leaked out to the Internet. Last week, images of this build showed that Microsoft's next operating system would allow users to change the background color of the Start Screen. Now WinUnleaked.tk has posted up yet another leaked image from this pre-beta build that shows yet another minor, but still interesting, Start page feature.

Specifically, the image appears to show that not only can the background color be changed on the Start screen but that the image of the background itself will also be able to be changed with a number of difference choices. The screenshot also seems to show that this feature hasn't been fully implemented yet with no difference in the background shown in the selections that are provided. While this kind of feature may be minor, it certainly opens up the door for Microsoft and third parties to provide lots of different background images for the Windows 8 Start screen, much like how desktop wallpaper creations have been huge for previous versions of Windows.

As we mentioned last week, we will almost certainly continue to see screenshot leaks pop up on the Internet in the coming weeks. Microsoft is expected to release a public beta version of Windows 8 around the time of the 2012 Consumer Electronics Show in early January. The OS is expected to be officially launched in 2012, hopefully in time for the back-to-school shopping season.