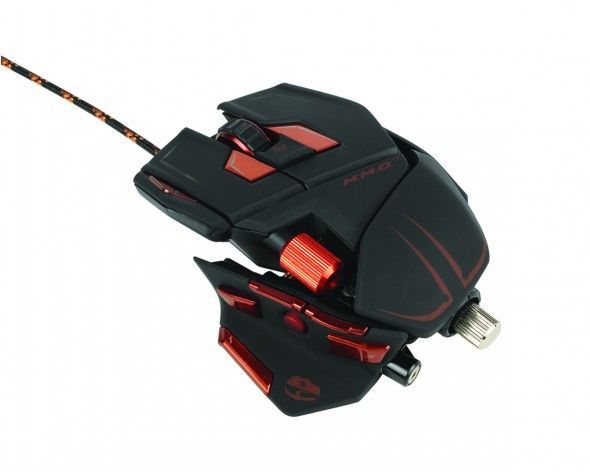 Mad Catz is best known in the game industry for its various third party console controllers. Lately the company has received praise for its Cyborg line of gaming PC mouse products. These mice not only have an unusual design but are made to be extremely adjustable to a PC gamer's hand. Now Maximum PC's web site has revealed that Mad Catz is working on a new version of the Cyborg mouse, the M.M.O 7.

The mouse, as the name suggests, is being created specifically for the PC gamer who loves massively multiplayer games. The original Cyborg R.A.T. mouse had just six programmable buttons but the M.M.O 7 has a whopping 13 buttons. It also has a shift button and a three-mode toggle. All of those options will give the MMO gamer up to 78 custom bindings per profile. There are also a button on both sides of the M.M.O. 7's scroll wheel.

The mouse itself also comes with a very high 6400 dpi sensor on the bottom, making the M.M.O 7 perfect for gamers who want that added push of sensitively when they use the product.

So far Mad Catz has yet to reveal a price range on the Cyborg M.M.O. 7 but it's expected to be on the pricey side. It's due for release in mid-December which should be just in time for the mouse to be used by all those folks waiting to play the next big MMO game launch, Star Wars The Old Republic.