We promised you a look at Windows Live Messenger 2010 earlier this week when we revealed Microsoft is planning both Bing and Messenger iPhone applications next year.

Thanks to an anonymous tipster we received several screenshots of Microsoft's upcoming Messenger client due in 2010. We have confirmed these to be genuine and they offer a small insight into what the software giant is planning for Wave 4 of Windows Live.

Firstly the main Messenger window that contains your contacts has changed somewhat. Included on the left hand side is a "social stream" of updates provided by Windows Live. These are updates from your Messenger contacts and the data is provided by Windows Live. In current public Messenger builds some of this integration is present at the top of a conversation window. Windows Live Messenger aims to add to this by using the "social stream" as a showcase for your contacts updates. Providing your friends have included their Facebook, Twitter and Blog posts into Windows Live then you will see this in the stream. 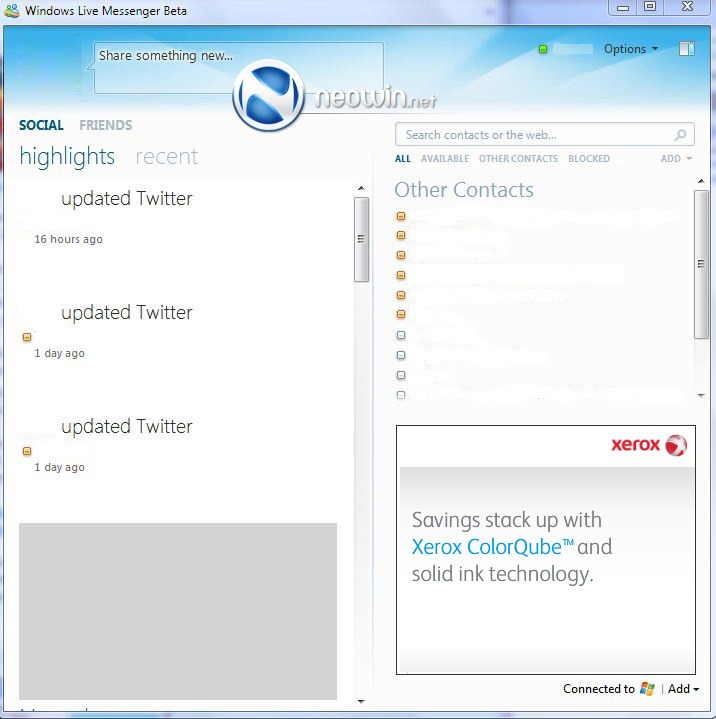 One of the main improvements for Windows Live Messenger 2010 is the introduction of tabbed messenger conversations. Users have been requesting this functionality for years and Microsoft has finally listened and built this in.

Many are hopeful for some Wave 4 announcements at the Consumer Electronics Show in January and we are expecting some focus on Windows Live during the event. We're expecting Microsoft to make a public beta of the Wave 4 bits during the first quarter of 2010.

Reminder: These are likely to be shots from early builds so may not reflect the final UI.