A musician from Saskatoon, Canada has succeeded in promoting himself online by getting his picture onto Google's Street View. Getting himself ahead of the car when it visited his town earlier this year wasn't easy, but it paid off when Saskatoon's Street View recently went online.

"One of the hardest things, beyond making music, is how to get people to hear it," said Nate Heagy in an interview with Canada's CBC News.

"Promoting a band is hard. And all the while I've been working on the album I've been trying to think of how I can promote it - how I can get noticed."

"When Google announced that Street View was coming to Saskatoon, a light bulb went on," he said. "I just thought Street View would allow anyone on any corner to be seen by any number of people anywhere."

"I figured Saskatoon's not that big, I could probably find the Google car if I really wanted to. So I built a sign, and kept it in the trunk of my car."

Enlisting friends to keep an eye out for a car with a large camera mounted on the roof, Heagy began waiting for a call telling him where it was. Having lunch one day, Heagy saw the car himself and rushed to his own car to catch up with it.

Following the car and observing it, Heagy managed to anticipate where the Google car was going to next and drove ahead of its predicted path.

"I quickly set up the sign, brought out the guitar and started playing," he said. "And the car drove by. And then I actually drove on to another corner and did the same thing."

The chase happened in spring of this year. Then when Google launched Saskatoon's Street View in November, Heagy said he checked the site to see the results.

"As soon as I saw me with the sign, I just hollered and was cheering because it was a lot of effort and a long wait to see if it had even worked, this crazy idea I had. There it was. It was kind of fulfilling."

"The whole point is that curious people will, maybe, look for the music and find it," Heagy said. "And curious people, I think, are the kind of people who will like my style of music." 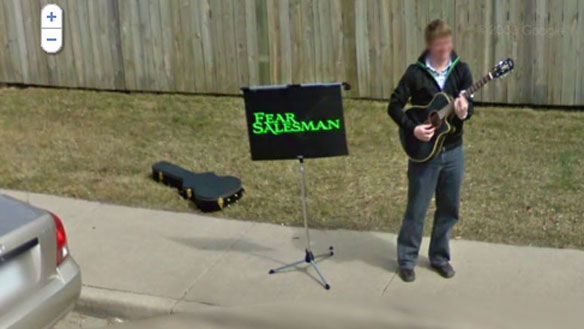