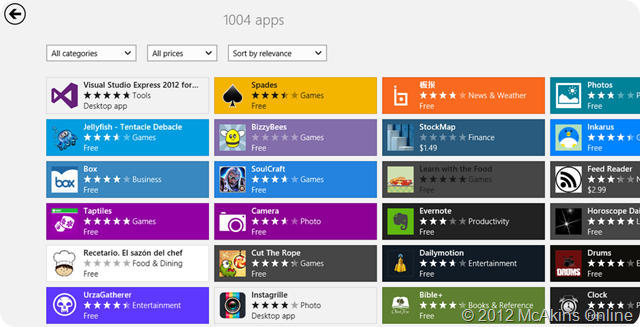 We have seen a large rise in the number of Windows 8 apps that users of the RTM version can see from the Windows Store. Today, a third party site that has been tracking the numbers of those apps stated that it has now passed the 1,000 milestone.

McAtkins Online says that in its latest app count shows there are now 1,004 apps that are visable for Windows Store users. This number includes both desktop apps (which cannot be directly downloaded from the Windows Store) and the "Modern" Windows 8 apps. Just a few days ago, the same website said there were 839 apps available on the Windows Store.

So the next question is, "How many Windows 8 apps will be in the Windows Store feature when the official launch of the OS happens on October 26th?" We still have a number of weeks to go before that happens and we suspect that there are quite a few apps that are waiting in the wings to be released.

It's also possible that Microsoft could be holding back until just a few days before October 26th before it decides to open the flood gates for new Windows 8 apps to be released.