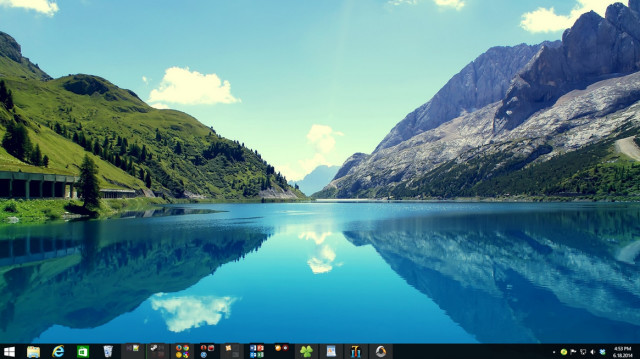 Microsoft is hard at work on the next major update to Windows and we don’t mean Update 2. Threshold, as it is currently known, is a wave of updates coming to Windows and other platforms; much like how Blue brought new features across many of Microsoft’s key platforms.

While it is still a little unclear if the Threshold update for PCs will be called Windows 9 or something else, what is starting to become known is how that OS will deviate from Microsoft’s past. For mouse and keyboard users, Threshold will be the update many have been waiting for as Microsoft continues to move away form the Sinofsky vision of hybrid OS.

Threshold will be a further move away from the Modern UI environment for desktop users. In some builds of Threshold, the Modern UI is disabled by default. You have to manually turn it back on but this is situation dependent, if you wish to access the live tile environment.

If you are on a tablet, the Modern UI is still present and takes precedence over the classic desktop but on traditional PCs, the Modern UI is no longer utilized by default. This is where some of the confusion comes in that we had been hearing about a ‘decentralized’ use of the Modern UI but this is device-specific; for tablet and hybrid device users, the touch-focused UI is still a focal point. The biggest changes are in store for users of desktop-class systems.

How is Microsoft going to move forward without a Modern UI by default for Windows? It’s quite easy to see the path and our sources are confirming this information. Microsoft will still allow Modern apps to run in a windowed mode on the desktop and with the new Start menu (also present in Threshold) having the ability to launch un-pinned Modern apps, mouse and keyboard users can happily live on the desktop without being troubled by Metro-esque menus and screens if they wish.

By having full control of Modern apps from the desktop with other enhancements brought with Windows 8.1 Update 1, the modern environment is no longer needed for desktop users and is shut off.

Don’t worry though, app snapping is still present in the current builds of Threshold and in fact, there are enhancements in this area too. The details are a bit sparse at this time but snapping has been further refined and may include new positioning for modern apps.

We have also been hearing that the UI is ‘visually distinct’ too, meaning that when you see Threshold, it’s easy to tell that it is not Windows 8.1.

It’s important to note that we are still in the early stages of Threshold and that anything and everything is subject to change. But from what we have been able to gather, Microsoft is once again listening to all the complaints that said ‘let me turn off the Modern UI’.