The Windows Phone community had a lot to talk about this week with the announcement of the Nokia Lumia 1020 smartphone, but in the middle of all that excitement, one of the most popular free apps got a major update. 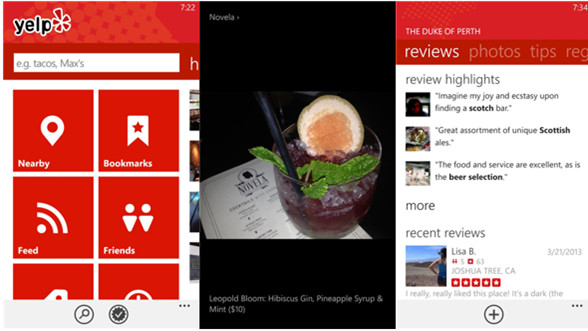 As pointed out by the Windows Phone blog, the official Yelp app for Windows Phone 7.5 and 8 now has a new version (2.5.0.0) available to download from the Windows Phone Store. In case you are one of the two smartphone users unfamiliar with Yelp, it offers user-created reviews of restaurants and other local business and destinations.

The new version for Windows Phone finally allows users to write up their own reviews of businesses from within the app, something that really should have been included from the beginning. It also adds yet another long awaited feature; the ability to check in virtually at a destination and share that news with other Yelp users.

If you use the Yelp app to search for a restaurant and find one that's to your liking, the Windows Phone version now allows you to make a reservation, thanks to a link to the OpenTable service, but without having to leave the Yelp app. All in all, it's a significant upgrade from previous versions.